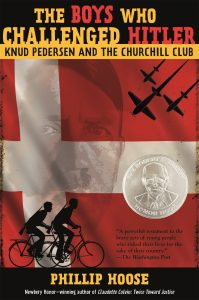 In The Boys Who Challenged Hitler: Knud Pedersen and the Churchill Club, Phillip Hoose tells a captivating true tale of rebellion and bravery. In my studies of history, I had never heard of the resistance movement against German soldiers led by Danish schoolboys. Until I read this book, that is.

In April 1940, Hitler’s Germany invaded Denmark in a single day. The Danish government signed an agreement with Germany allowing them to occupy Denmark while Danish citizens carried on with their day-to-day lives. Most were simply happy to be alive, but others, like Knud Pedersen (a fifteen-year-old at the time) were outraged at their government’s lack of resistance against the invasion.

In revolt, Pedersen and a few acquaintances vowed to commit small acts of sabotage against German soldiers living in their Danish town. They attacked mostly on bicycles, and their plans ranged from flipping directional signs guiding German troops to completely disabling German army vehicles. While many of the attacks did seem foolish on the boys' part, they were only encouraged by the idea of getting caught and Hitler knowing their names. By the time the authorities caught up with the Churchill Club, they had managed to steal German lugers, rifles, a machine gun, and a handful of mortar grenades. They did end up serving time for their actions, but not before they infuriated the Germans and fueled a resistance movement in Denmark.

This 2016 Robert F. Sibert Informational Honor Book is made up of personal accounts by Knud Pedersen himself, who Hoose interviewed in 2012. Hoose weaves Pedersen’s personal story with his own narration, clarifying details throughout. Hoose dedicates the book to "young people everywhere who find the courage to make up their own minds." The Churchill Club certainly did.