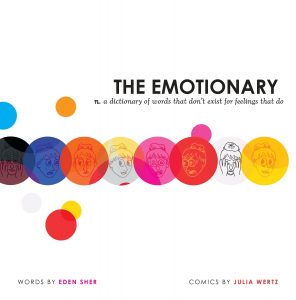 , opens a new windowThe Emotionary, by Eden Sher, is the dictionary that no one ever knew s/he needed. It’s chock-full of words and definitions that explain everything that you constantly want but have been unable, to explain to those around you.

Have you ever found yourself to be irredependent, or “unable to ask for help under any circumstances"? Do you suffer from namenesia, which is “the experience of forgetting someone’s name literally one second after they’ve introduced themselves"? How often do you solisipate, or “pretend to listen to another’s story while actually completely ignoring it, waiting for one’s turn to speak"?

Just as one might expect from a dictionary, each entry contains the word itself, the words that were combined to form said entry, the etymology, the part(s) of speech, and the definition. For definitions that you may not have personal experience with, a number are accompanied by comic illustrations by Julia Wertz. These hilarious entries and equally amusing depictions of struggles we find ourselves experiencing on a regular basis will give you a chance to pause and chuckle at the fact that you are not alone in your struggles - even if you’ve never had a word for them before!

For more books that will help you better explain what has been running through your mind to others, or to at least help you lighten the stress you have been feeling about life, check out Everything a Band-Aid Can’t Fix, by Nicole Russell, and The Little World of Liz Climo.