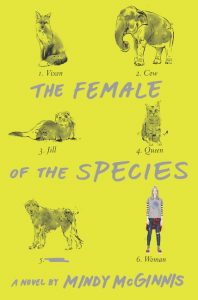 In The Female of the Species, by Mindy McGinnis, Alex is struggling with the repercussions of losing her sister, Anna. Three years before, Anna was brutally raped and murdered. This horrific event was made worse by the fact that the known perpetrator walked free. That series of events left Alex feeling like a wild animal whose true nature was finally being revealed.

While Alex struggles with all of the pent-up rage that these events left her, we see her through the eyes of others, too. Jack, the jock of the town, sees her as the right girl, the one who brings out all of his redemptive qualities and makes him want to be a better person. Claire, a quiet girl who bonds with Alex over their hours volunteering at the local animal shelter, sees her as the strong, courageous young woman she wishes she could be herself.

Alex is unabashedly not a hero, though, and, through the pain of what happened to her sister, she has become a perpetrator in her own right. She warns people to stay away from her - that she's dangerous - but they don't really understand. It’s only as her actions begin to escalate that people might finally begin to see what Alex was trying to tell them all along.

Both harrowing and gripping, this decidedly dark tale will leave you grappling with issues of human nature and the question of right versus wrong long after you put it down.

Other twisty reads about how we are all connected are The Thousandth Floor, by Katherine McGee, and A List of Cages, by Robin Roe.