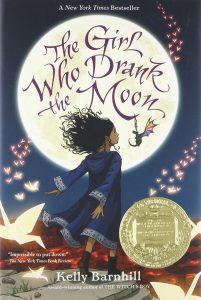 There is a witch in the woods. The people of the Protectorate know it. Each year, they are forced to leave a baby as a sacrifice to the witch, lest she destroys the whole city.

But just who is the witch in Kelly Barnhill’s Newbery Award-winning book, The Girl Who Drank the Moon? Maybe it’s Xan, who can’t figure out why the people of the Protectorate keep abandoning their children but protects the babies with her magic until she can find them adopted homes in the Free Cities. Or, perhaps it’s Xan’s adopted granddaughter Luna, who became magicked and now spends her days with Fyrian, the Perfectly Tiny Dragon who thinks he’s a Simply Enormous Dragon, or Glerk, the poetry-obsessed monster who lives in the Bog. It’s certainly not Antain, a young man from the Protectorate who is becoming more and more determined to stop the yearly sacrifice.

Little do any of them know, though, that magic comes from many sources, and a woman with the heart of a tiger is on the prowl. As the characters fight to save the ones they love, memories, stories, and magic intertwine in a complex and lyrical plot.

Reading this book is like listening to a well-told folktale. The story is complex, but Barnhill pulls the various pieces and plotlines together masterfully. Adventure and mystery blend neatly into an entrancing tale of good vs evil.

Readers who enjoy this story will also want to check out Barnhill’s other books, especially The Witch’s Boy. Or, for other stories with a magical spin on the idea of perfect families, try Neil Gaiman’s Coraline or the Oscar-nominated movie Kubo and the Two Strings.