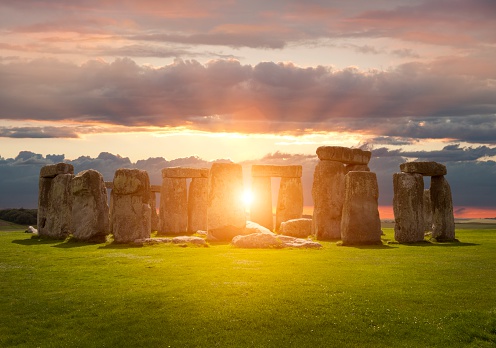 Take a moment to savor the summer delights and craft some new traditions while learning the legends of summer.

Humans in prehistoric times built monuments to commemorate both the winter and the summer solstices throughout the world. Solstice comes from the Latin words sol meaning sun and sistere meaning to cause to stand still. As the days lengthen, the sun rises higher and higher until it seems to stand still in the sky. Nature religions, both ancient and modern, hold the solstices in great esteem. Modern-day druids perform rituals based on old beliefs at Stonehenge in Wiltshire, England, each year.

The Heel Stone is a rough stone, 16 feet above ground, leaning inwards towards Stonehenge. It has been known by many names in the past, including "Friar's Heel" and "Sun-stone".  During the summer solstice, an observer standing within the stone circle, looking northeast through the entrance, would see the Sun rise in the approximate direction of the heel stone, and the sun has often been photographed over it. In the Americas, Machu Picchu and the Sun Dagger of Chaco Canyon, New Mexico show evidence of ancient astronomical design.

June has long been associated with marriages, and much midsummer lore has arisen from the greening time. The act of silently gathering nine kinds of flowers and placing them under a pillow is supposed to reveal in dreams the identity of the person to be wed. The honeymoon to follow was originally a time when the newly-weds would share foods prepared with honey so that their lives together might be sweet. In the Catholic Church, St. John is associated with Midsummer and is believed to be the protector of lovers.

Herbs and flowers harvested on Midsummer Day were believed to have magical qualities. Specially gathered fern seed was believed to make people invisible and guide them to buried treasure, and wreaths and garlands of flowers were devised to bring health to households and ward off evil.

Sir James George Frazer's Golden Bough, a popular work of early anthropology, is a collection of folk legends from the dusty corners of scholarly libraries and includes many references to old Midsummer customs throughout Europe.

The sweltering heat of our region's summers keep many indoors for the season, but some hardy souls gather at the river for picnics, tubing, and the traditional canoe and raft races. Crowds gather at the farmers' markets, especially on Saturday mornings, for the freshest produce of the season. Barbecuing or grilling is another summertime tradition, as are children with a little too much time on their hands. Try books from the library for ideas on how to make summer traditions special.

This children's list includes books about activities and adventure in the summertime. Includes Spanish language titles.