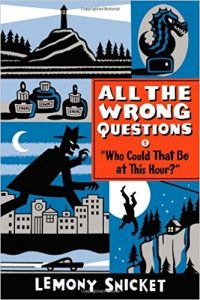 Lemony Snicket is back in action. "Who Could That Be at This Hour?" is the first volume of a new four-book series known as All the Wrong Questions.

Set in the same world as Snicket's A Series of Unfortunate Events, this book takes place decades earlier. Our author, at the time a young boy, runs away to join a nameless society. He becomes an apprentice to S. Theodora Markson, who is a mix between a private investigator and a secret agent. Don't ask her what the S stands for. It is one of those wrong questions.

The pair is hired to track down a precious item, a fearsome looking statue, in a sleepy town. Unfortunately, it seems that all the town have their eyes on Markson and Snicket, and others want the statue as well.

Where Unfortunate Events parodied and referenced the great gothic, Victorian and romantic novels, this new series decides to mix hard-boiled detective stories and film noir. It is a world of roaring roadsters, femme fatales, and MacGuffins galore. A lot of the fun of a Lemony Snicket book is seeing how he can mimic a certain exercise in style. Following those genres also means that the plot is sometimes a tad confusing, with double-crosses and few easy answers. Thankfully, Snicket's dry sense of humor can keep the reader entertained throughout the twists and turns.

Another great theme in Snicket's books is the balance of power between children and adults. Violet, Klaus, and Sunny, the Baudelaire children of his previous series, constantly dealt with adults who were well-meaning but would not listen to them in dire situations. A similar conflict is present here between Snicket and S. Theodora Markson, who often talks down to the boy and gives him bizarre vocabulary lessons, an eccentricity that the adult Snicket often demonstrated in his Unfortunate Events books. It is comforting to see that sort of continuity between the two series.

I have read that as the books progress, other familiar characters from Unfortunate Events may start to appear. I can only hope that we will see a younger version of the menacing Count Olaf, the driving force of the Baudelaire children's misery.

"Who Could That Be at This Hour?" combines clever wit and menacing motives. Check it out and solve its mystery today!