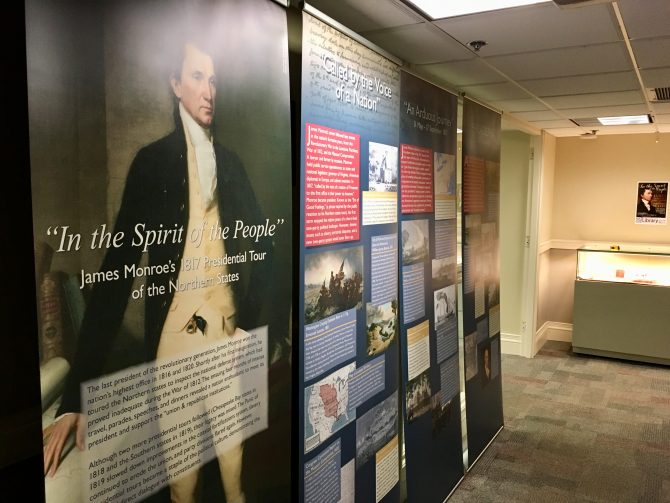 opens a new windowFredericksburg, Virginia, October 15, 2018 - In the Spirit of the People: James Monroe's 1817 Tour of the Northern Statesopens a new window, a traveling exhibit commemorating the bicentennial of an historic presidential tour, is on display at Central Rappahannock Regional Library's Fredericksburg Branchopens a new window through November 12. On Wednesday, October 24, 7:00-8:30 p.m., James Monroe Museum Assistant Director and Curator Jarod Kearney will discuss the exhibit and artifactsopens a new window owned by the Monroe's on also on display at the library.
James Monroe became the fifth president of the United States in March, 1817. Three months later he embarked on a fifteen-week tour of the northern states, traveling up the east coast from Washington, DC to Portland, Maine; west to Detroit; and back to Washington via Ohio, western Pennsylvania, and Maryland, totaling some 2,000 miles.
Modern-day presidents are readily recognizable by almost every American. This was not true two hundred years ago. Monroe’s predecessors rarely traveled, and there was no electronic media continually broadcasting the president’s image or the sound of his voice. Monroe’s tour therefore created a national sensation. Americans came out by the thousands, thrilled by the opportunity to see the president, and newspapers across the country gave day-by-day accounts of his progress. Political differences were forgotten as Americans of both parties joined together in grand celebrations marked by parades, speeches, dinners, balls, receptions, and concerts. A Boston newspaper coined the phrase “Era of Good Feelings” to describe the national unity created by Monroe’s tour. The term became the catch-phrase of his presidency. 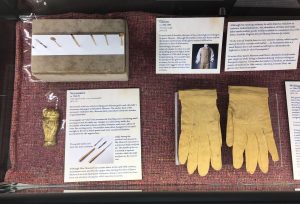 opens a new windowMonroe’s two terms in the White House (1817-1825) capped a public service career that included combat service in the Revolutionary War; state and federal legislative offices; the governorship of Virginia; diplomatic missions to France, Great Britain, and Spain; and stints as secretary of state and secretary of war. As a special U.S. envoy to France in 1803, he played a decisive role in negotiating the Louisiana Purchase Treaty. During his presidency, Monroe signed the Missouri Compromise to deal with the growing sectional divide over slavery (1820); granted diplomatic recognition to emerging South American Republics (1823-24); and issued the Monroe Doctrine, declaring the western hemisphere closed to further European colonization (message to Congress, 1823). He capitalized upon the success of his 1817 northern tour by visiting the Chesapeake region in 1818 and the southern states in 1819.
In the Spirit of the People consists of ten full-color vinyl banners containing images, quotations, and captions to present a history of the northern tour and convey a sense of the exuberance it generated. The first three banners introduce viewers to James Monroe and offer an overall summary of the tour. The next six banners focus on specific locations that Monroe visited, with one banner dedicated to each. The final banner offers interactive educational links as well as credits for the exhibit's sponsorship and preparation.
The exhibit is a joint project of The James Monroe Museumopens a new window and The Papers of James Monroeopens a new window, both of which are administered by the University of Mary Washingtonopens a new window(UMW). The museum, founded in 1927 by Monroe descendants, is a National Historic Landmark housing the largest single collection of artifacts and archives related to the fifth president. The Papers of James Monroe is a publication project that has produced six volumes to date of selected official and personal correspondence pertaining to Monroe's long career in public service. Students in UMW's museum studies program worked on all aspects of In the Spirit of the People, from research and image acquisition to copy writing and graphic design.
Previous
Next