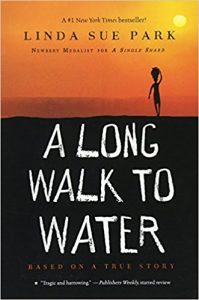 In 2008, Nya, a young woman who lives in Sudan, walks two hours one way to get water for her family. She does this twice a day. She does not have shoes. In her book  A Long Walk to Water, Newbery medalist Linda Sue Park, introduces us to Nya. She also introduces us to Salva, a young man living in Sudan in 1985.

Their stories are told in alternating tales. Salva is a young student in Sudan in 1985. His country has been going through a civil war for decades. One day while Salva is at school, a group of rebels attacks his village. The teacher tells all the students to run away to escape the attack by the rebels. Salva does as instructed but soon finds himself alone and far from his home. He certainly does not feel safe. He is lost and disoriented. He meets up with a group of refugees who are leaving Sudan and heading to Kenya. Salva joins the group though they are reluctant to accept him because he is a child and may become a burden. Salva walks with them, hoping to find safety in Kenya and hoping to be reunited with his family.

In 2005, a peace agreement was reached in Sudan with the understanding that in 2011, southern Sudan would have the opportunity to vote to separate from the rest of the country. Nya is living in contemporary Sudan. Though the war has ended, there is still the daily struggle to find clean water. The water that Nya and her family drinks are not clean. In fact, Nya's sister becomes very ill after drinking some contaminated water. They are all constantly at risk of becoming sick or worse...dying without clean water.

Meanwhile, Salva, who has now become one of the Lost Boys of Africa, makes his way to a refugee camp in Kenya. He lives there for years. Eventually, through rescue efforts, he goes to Rochester New York...in winter. There he is taken in by a family and he goes to school. But Salva can never forget his love for his country Sudan and his family.

Take these journeys with Nya and Salva set against the contemporary backdrop of a war-torn and struggling country that is very much in the news today. This book is based on the true life experiences of Salva Dut who was born in Sudan and now lives in Rochester, New York.