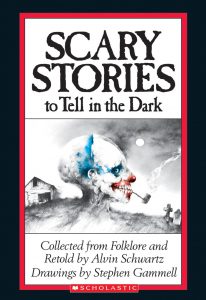 Alvin Schwartz, the writer of many books for children that collected and shared traditions from times past, first became interested in folklore as a child, although at the time he did not think of it as something to study.  Folklore was just something that was part of his childhood: the games, riddles, rhymes, superstitions and scary stories. He grew up to become a journalist and also worked as an adjunct English professor. Later, his writing and research skills would play an important part in the job he eventually took on to make many types of folklore familiar to young readers.

In 1963, Alvin Schwartz quit his steady job to become a full-time freelance writer. He got started by converting the shed in his backyard into an office. At the beginning, he wrote about serious social issues - the labor movement, the decay of inner cities, and bridging the gap between the generations. But most of his best-known work is certainly not that serious. When grant money dried up for those kinds of books, he decided to become a collector and re-teller of folklore for children - sometimes going to libraries to look things up in old books and sometimes getting his stories and jokes from neighborhood kids. Some of the folklore he collected was funny, and some of it was scary. One of his silly books, A Twister of Twists, A Tangler of Tongues: Tongue Twisters, became a bestseller in 1972.

In an interview with Language Arts magazine,* he shared some steps of his writing process:

"Basically, what I do with every book, is learn everything I can about the genre. This will involve a lot of reading and scholarly books and journals and sometimes discussions and scholarly folklorists. I do a lot of my work at Firestone Library at Princeton University. I live about a half mile from there, and this is one of the reasons we live in Princeton. It's really a fine library. In the process of accumulating everything on a subject, I begin setting aside things that I particularly like. What's interesting is that eventually, patterns emerge. What I'm looking for is not only what I like, but things that typify the genre. So there is a range of material and there always will be. In working with "scary story" material, one finds five or six or seven typologies. I was not aware of this with Scary Stories until I began searching the material and putting it together. Sometimes I will go so far as to study the structure of an item to see how it works because this is important in making selections and it's also interesting to people to understand this, I think.

Then having done the research, I begin putting the book together. If there is writing involved, then that comes next. Generally, one of the short books, an "I Can Read" book, takes me six months to do, about half the time in research and half the time in writing. The writing is very important to me. Everything I write is read aloud three or four times in the bathroom because the acoustics are so good. I'm listening to the way the sounds link up and work together, so I will lock myself in the bathroom and read the book aloud and put big red circles around those things that are not working in terms of sounds. Since a lot of this material is going to be told, the sounds are important. But, what I'm also after here when I'm dealing with tales, are stripped down tales--right down to the essentials, because traditionally, storytellers will take such a tale and embellish it themselves. I want them to be able to do this. Now I've discovered that professional storytellers are using my stuff. And librarians use it in this way, I hope. They should be. After all, every time you sing a folk song, it changes. That's essentially what I do."

Whether you prefer his silly tales or scary stories, you’re sure to find a winner with Alvin Schwartz’s legacy of legends and folklore for young people.

Whether you prefer his silly tales or scary stories, you’re sure to find a winner with Alvin Schwartz’s legacy of legends and folklore for young people.

The articles below come from the CRRL’s database collection, available to our cardholders: