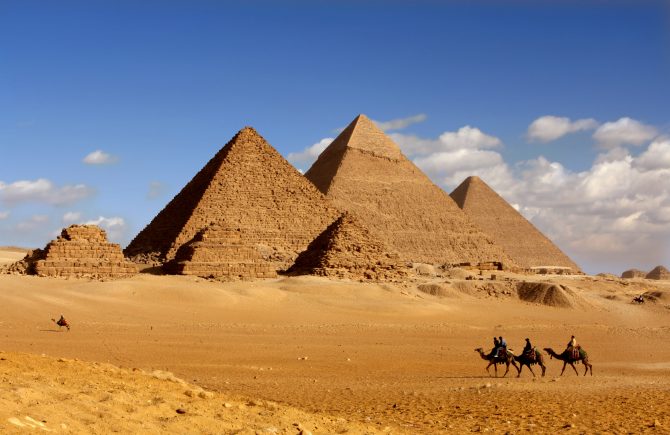 Ancient cities grew up around rivers, for the rivers were the source of life for all the people and animals who lived there. The waters of the Nile were no different. They flooded every year, making the soil rich for growing crops.

In time, a civilization arose by the Nile whose wonders can still be seen today. From the Valley of the Kings to the pyramids and the Sphinx, the almighty rulers of Egypt left monuments to celebrate their glory for eternity.

You needn't take a boat, an airplane, or even a camel to discover this ancient place. You can discover lots about Egypt on the Web and in the library. Unearth the Nile's secrets with our Ancient Egypt Book List to guide you:

More to Explore on the Web

All About Ancient Egypt
Explore the daily life of the ancient Egyptians, their gods, pharaohs, pyramids, and hieroglyphics. The geography section includes maps.

Ancient Egypt for Kids
This useful site has information on Egyptian gods, mummies, life in ancient Egypt, pharaohs, papyrus, achievements and inventions, hieroglyphics, and the gifts of the Nile.

Ancient Egypt Online
A wonderful online resource to the many marvels and mysteries of ancient Egyptian civilization.

Ancient Egyptian Beliefs
Tells the story of Osiris, his wife, Isis, and the evil brother, Seth. When you have finished the story, try the Pyramid Crossword Puzzle.

Infotrac Kids' Edition Database for CRRL Card Holders
Use the search terms pyramids and hieroglyphics for some good articles from children's magazines.

Mysteries of the Nile
"Explore the Pyramids, temples, and other monumental architecture of ancient Egypt through riveting 360° photos shot during this NOVA/PBS Online Adventure."

Below is a short video from National Geographic that tells quite a bit about ancient Egypt: