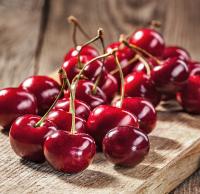 Tart or sweet, cherries are a favorite flavor, and there's more to cherries than meets the eye. Cherries actually belong to the rose family. Cherry's rosy relatives include other stone fruits such as almonds, apricots, plums, peaches, and nectarines.

February is a terrific month to dig into cherries. For years, people have made cherry pies to celebrate George Washington's birthday on February 22. Why do we think of cherries when we think of our first president?

When people become as famous as our George Washington, writers sometimes make up childhood stories about them. Two hundred years ago, a man named Parson Weems wrote a best-selling book called The Life of Washington. He had lots of stories in it that were supposed to have happened to young George during his days in Stafford and Fredericksburg. Here is the famous one about George Washington and the cherry tree:

When George … was about six years old, he was made the wealthy master of a hatchet! Of which, like most little boys, he was immoderately fond, and was constantly going about chopping everything that came in his way. One day, in the garden, where he often amused himself hacking his mother's pea-sticks, he unluckily tried the edge of his hatchet on the body of a beautiful young English cherry-tree, which he barked so terribly, that I don't believe the tree ever got the better of it.

The next morning the old gentleman, finding out what had befallen his tree, which, by the by, was a great favorite, came into the house; and with much warmth asked for the mischievous author, declaring at the same time, that he would not have taken five guineas for his tree. Nobody could tell him anything about it. Presently George and his hatchet made their appearance.

"George," said his father, "do you know who killed that beautiful little cherry tree yonder in the garden?"

This was a tough question, and George staggered under it for a moment; but quickly recovered himself: and looking at his father, with the sweet face of youth brightened with the inexpressible charm of all-conquering truth, he bravely cried out, "I can't tell a lie, Pa; you know I can't tell a lie. I did cut it with my hatchet."

"Run to my arms, you dearest boy," cried his father in transports, "run to my arms; glad am I, George, that you killed my tree; for you have paid me for it a thousand fold. Such an act of heroism in my son is more worth than a thousand trees, though blossomed with silver, and their fruits of purest gold."

Whether the story is true or not, it is true that there were many cherry trees in Virginia long ago. The English settlers brought them with them, and the Washington family probably had them at nearby Ferry Farm. But it's hard to grow cherries here. The weather and soil aren't the best. Cherries grow much better in the Great Lakes region (mostly sour cherries, used for pies) and on the West Coast (mostly sweet cherries for eating fresh).

In our region, cherries get another big celebration, though. The National Cherry Blossom Festival is a terrific time to go into DC and take in the sights and smells of spring. These beautiful flowering (sorry, no eating cherries!) trees were given to us by Japan as a sign of their friendship. There will be lots to see and do at the festival, much of it free.

Whether in Washington, D.C. or in Washington state, cherries have always been one of America's favorite fruits, and like most all fruits, they are good for you, too. We do have some cherry orchards in Virginia, and, when the fruit is in season (usually late spring or summer), there are lots of things you can do with them. Looking for a cherry orchard near you? Try PickYourOwn.org's search for the name of your state and cherries—or, whatever fruit or vegetable you like, for example, Virginia cherries.

Want to time travel during your dinner? Hit the grocery store for some basics and try this easy, sweet blast from the past on Washington's birthday:

Pour the gelatin into a mixing bowl. Add the boiling water and stir until the powder is completely dissolved. Add the ice-cold water and stir. Add the thawed whipped topping and whisk the ingredients together until very well blended. Spoon the whipped dessert into 6 to 8 dessert dishes, depending on the size of the dish. Place the dishes on a tray and loosely cover the dishes with foil or plastic wrap.
Refrigerate for about 6 hours before serving. Top each one with a maraschino cherry and serve chilled.

If you'd rather make a more traditional cherry pie, it's quite easy. You can get frozen pie crust and canned pie filling at the supermarket. Just follow the directions on the can, and have a grownup nearby to help.

You can make your own crust. There's more work to do, but your pie will taste better, and you will pick up a real cooking skill.

Here's a recipe for a simple, flaky pie crust: 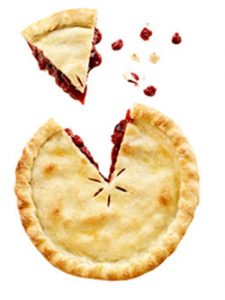 A clean, flat surface, such as a counter, a large cutting board, or table with a plastic cover
A rolling pin
A big bowl
A big spoon
A fork (a pastry cutter is optional)
Measuring cup and a measuring spoon
Pie pan
Spatula
Cookie sheet
Pastry brush (optional)
Table knife (not sharp)

Want to pick some cherry books to enjoy with a slice of pie? Check out our list of Very Cherry Stories. You and your family can also enjoy all of the birthday activities at George Washington's Ferry Farm in Stafford and George Washington's Birthplace in Westmoreland County.