Columbus Day is sometimes called Discoverers' Day. In the spirit of discovery, take some time to learn about the world as it was in the days of the European explorers. You can make a compass, learn about the stars, read about other explorers and discoverers, and find how even our way of eating has changed since the Europeans came to the Americas looking for gold, glory, and, yes, tasty cooking spices. 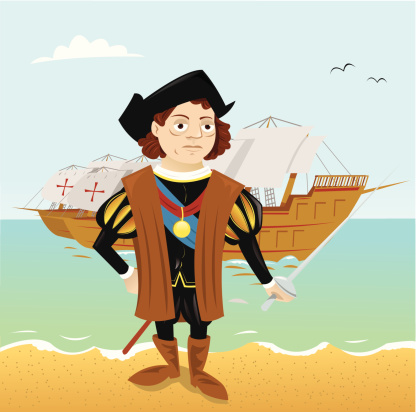 The explorers who came to the Americas found the food enjoyed by the native people to be very different from what they knew at home. They had never seen tomatoes, potatoes, sweet potatoes, maize (corn), pineapples, chili peppers, or even cocoa. The vegetable dishes from the Europe they knew relied on parsnips, cabbages, peas, carrots, turnips, and onions. After being at sea and living off of a diet of lentil soup, salt beef from a barrel, salted sardines, hardtack, and other delights, the fresh, new foods of the islands would have been an astonishing change.

In time, sailors brought the New World foods not only to Europe but also took them along when they settled other lands. And, over the years, the Europeans brought olives, bananas, wheat, and sugarcane to the Americas. Now, about that pizza with no tomato sauce: a kind of pizza had been around for over a thousand years before Columbus made his voyage, but that rich, red sauce we know today comes directly from New World tomatoes he discovered.

For a Columbus Day dinner, ask for Mom or Dad's help to make a meal that shows how the Old World and the New World got together. Here's a recipe for Columbian Lentils that blends Old World flavors the sailors knew, such as lentils and onions, with New World ingredients such as tomatoes and potatoes for a delicious dish. Serve it with a nice loaf of Italian Bread (for Columbus) or a modern version of cornbread (for native peoples). After dinner, grab a mug of Thick, Rich, Spanish Hot Chocolate and watch the stars as explorers did on their long voyages.

Discover the tastes and cultures of Europe and the New World with these kid-friendly cookbooks. Click on any title to go to our catalog where you may place a request for the book.

Need a Book on Columbus' Life?

Central Rappahannock Regional Library has many books for students of all ages about Columbus. Check one out from our list.

Christopher Columbus Biography for Kids
Gross and tasty details of foods enjoyed by Columbus' sailors and the Indians.

Columbus Day Crafts and Activities
Great stuff here! Make a map, a globe, an Earth pendant, a totem pole, a rainstick, a dream catcher, and a paper canoe.