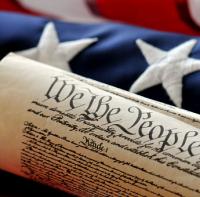 What kinds of people settled the new lands of America? They had their own ideas about laws, religion, and what makes a good government. They were, in a word, independent.

In 1776, England was far away, and people on this side of the Atlantic were heartily sick and tired of paying taxes on top of taxes to finance England's empty treasury. They were tired, too, of losing money by having the Crown interfere with their trade overseas. The men in the assemblies shouted that King George was a tyrant, so the King's men stopped the assemblies. When they still protested, the King brought in the army, making the colonists put them up in their houses. Any 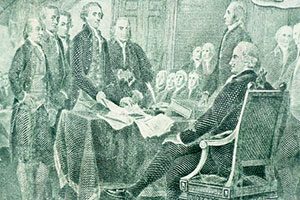 crimes the soldiers committed against the colonists were handled in the King's court by the King's judges.

The Declaration of Independence said that King George III, who acted in every way the part of the tyrant, was not fit "to be the ruler of a free people." The signers declared that the new states that they represented had the right to wage war against the Crown, continue to trade as they liked, and set up their own laws. The new government would be by the people and for the people, different from anything modern history had seen.

By putting their names on the Declaration, the 54 men might well have been signing their own death warrants. Had the Revolution failed, they would have been high on the list of traitors to the Crown, certain to be imprisoned or more likely executed. Their commitment to a higher ideal despite their differences and the danger of their situation prompted John Hancock to say, "There must be no pulling different ways: we must all hang together." Benjamin Franklin added, "We must indeed all hang together, or most assuredly we will all hang separately."

The Declaration of Independence was signed on July 4, 1776. Its brave and fiery words inspired both the citizens and the new American Army to suffer through a long war to defeat the British Army and begin an independent nation.

Read more about the Declaration of Independence on the Web and in the library:

CRRL Kids: The Declaration of Independence

Read about the famous document and the colonial leaders who wrote it and signed it, officially declaring rebellion against Britain.

America's Founding Documents
"These three documents, known collectively as the Charters of Freedom, have secured the rights of the American people for more than two and a quarter centuries and are considered instrumental to the founding and philosophy of the United States." Click More under each document's heading for extra information.

Ben's Guide to U.S. Government: The Declaration of Independence
A transcription of the Declaration and links to more information on the document, with a listing by colony of its signers.