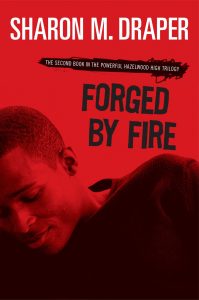 Years ago, three-year-old Gerald was left home alone in an apartment where a fire broke out. When authorities discovered that Gerald was home by himself, he was removed from the custody of his substance-addicted mother Monique and sent to live with his aunt. While living with his Aunt, Queen, Gerald is happy. After his aunt dies when he is nine, his mother returns but now she has a new husband, Jordan, and a daughter, Angel. Gerald goes to live with them, but he soon learns that all is not well. Jordan works sporadically and is abusive towards Angel and Monique. Monique does not stand up to Jordan - in fact, she spends most of her time trying to please him. Jordan's abusive behavior towards Angel is a constant source of distress for Gerald. Soon the problems escalate to a point that force Gerald's hand in Forged by Fire, by Sharon Draper.

Even with these problems at home, Gerald has become an accomplished basketball player on the high school team. He is able to seek the counsel of the father of one of his teammates. The strength he gains from his friends and the advice from a caring adult help Gerald navigate his way through the difficulties he faces at home. This book takes us into the life of an at-risk young man trying to do the right thing. Many of the adults he knows are negligent and abusive, but Gerald is determined to protect his little sister and himself.  He frequently encounters roadblocks that attempt to throw him off the track.

The Hazelwood High Trilogy is a group of books that gives the reader a glimpse into the lives of typically developing inner-city teens. A number of the teens have to deal with some very extreme home-life situations, as in Gerald's case. But there are also teens in these stories who come from functional homes. There is a balance, and there is the notion that the teens who are struggling have a safe harbor. Draper creates a story that is gripping and gritty. She balances realism with authenticity. The voices of her teen characters are believable, and she does not demonize all of the adults, just as she does not sell short the value of the teenagers.

Forged by Fire is a fast-paced coming-of-age story. The characters are well-developed and engaging, and, although the reader may not like all of the characters, they are authentic. Draper weaves a story that is well-crafted and hard to put down.