Our 16th president was a very odd-looking man. Long-limbed and raw-boned, this frontier president grew up without a lot of the niceties we take for granted today. He grew up surrounded by wilderness and not having much schooling. As he remembered it, "...I could read, write, and cipher (simple math) ... but that was all." 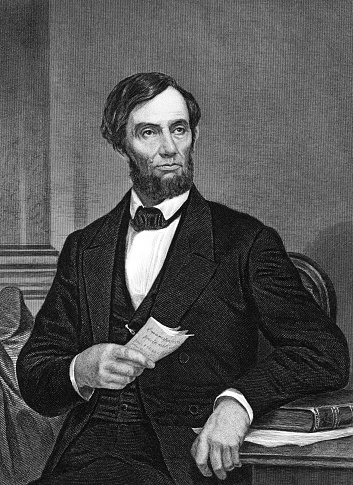 But the backwoods boy had the ambition to be more than a rifle-toting farmer. He got himself educated, and it was no easy job. To make money, he did farm—and split rails for fences—and ran a store, all the while pushing ahead with his law studies. Back in those days, you could study to be a lawyer by having another lawyer supervise you as you "read law" under him and worked as his clerk. There was no real need to go to formal law school in those days and many did not. In some states, including Virginia, you can still do this today.

He was in the army for a time and got an early start in politics. But he went back to lawyering for the railroad companies from his home base of Springfield, Illinois, during the 1840s and much of the 1850s. His business did well, yet he was drawn back into politics at last.

In 1854, he took a stand with the new Republican Party against the spread of slavery in the territories through the Kansas-Nebraska Act.

His famous speech denouncing that act put him in the national political spotlight, squaring off against his later presidential rival, Stephen A. Douglas: "I hate it because of the monstrous injustice of slavery itself. I hate it because it deprives our republican example of its just influence in the world... ."

Before the first shots in the Civil War were fired in 1861, the battle lines between the North and the South were clearly drawn and had been for some time. Abraham Lincoln was on the side of emancipation (freedom for the slaves) in that 1860 election. Lincoln won the election, beating his Democratic rivals, Stephen Douglas and John Cabell Breckinridge.

An Excuse for War

South Carolina had been on the lookout for a reason to secede from (leave) the Union. They knew that Lincoln would take a hard line against slavery, and as soon as the results were final, South Carolina was the first Southern state to declare itself independent.

Within a year, the nation would be gripped in a bloody civil war. Within five years, Abraham Lincoln would be dead--shot by an assassin's bullet. But Lincoln's legacies of freedom for slaves and union of the states would be the foundation of the next stage of American history.

CRRL Kids: Lincoln in the Library

This list accompanies the the Homework Helper, Getting to Know Abraham Lincoln. It is designed for early and upper elementary school students.

Abraham Lincoln Online
Click on Education to get the president's biography, his writings--including quotes, and places and events to check out to learn more about Lincoln.

The Assassination of Abraham Lincoln
Lots of information on the tragedy at Ford's Theatre in Washington, D.C. This article also links out to many useful sources on the same topic.  Recommended by Mr. Jackson's class.

The History Place: Abraham Lincoln
Includes a timeline and links to photos, letters, and historical documents.