Greg Riddlemoser, Director of Elections and General Registrar for Stafford County, has elected to share his reading choices with the Central Rappahannock Regional Library community:

Making reading recommendations is always dicey. We like what we like, and we benefit from our reading in our own unique ways. I guess that is one of the things that make books soooo powerful. I offer below a smattering of the stuff I like from light to heavy.

For beach reading, I actually like “Florida”-based books. Carl Hiaasen and Tom Dorsey. [The links are to their newest books, which I’ve yet to read but will on a beach in Florida come January!] Both authors are journalists for large newspapers who also write fiction and do so very well. Now, check the descriptions carefully, because Hiaasen also writes books for tweens and teens . . . but most of their repertoires are at least “PG.”

As a student of history and a military man, I like to read military novels and historical tomes, preferably at least partially based on actual events—or at least probable fancy. Tom Clancy and Stephen Coonts—in the early days, they were my go-to guys. Both are using ghost and/or co-writers for most of their newer pieces. [The links are not to their newest books but rather to the ones I most recently read—both for the second or third time.] Very recently I discovered a series that I can’t stop reading. Jack Reacher novels by Lee Child. He’s done over 20 books and five short stories. I’ve read four of his books and have four more on the shelf in the kitchen. This is really good stuff about a former Army MP/Investigator turned wanderer and occasional private-eye/problem solver. And, if you’ve seen the Tom Cruise movie “Jack Reacher,” based on Child’s book One Shot, and you’ve read a book or two from this series, you know Tom was the wrong actor! Jack Reacher is a HUGE man. And he solves his cases in a HUGE way!

I’m very interested in America’s form of governance and in her storied history and her larger-than-life figures. I often read, a few pages at a time, things like The Federalist Papers, early Senate and House floor debates of significance, almanacs, atlases, and anthologies. I recently had the opportunity to visit SW Louisiana and got to visit a very old house that had very old books. One particular bookshelf had the early years of the U.S. Senate’s proceedings. These books were first edition (1789-1875), leather-bound, and authentically musty. Very seldom can you taste and smell a book as you turn its pages. On the first few pages were the certification of the first Electoral College, the summoning of the winner (George Washington) to the capital, his inaugural address, and the Senate’s response. There were motions to select three senators to receive our new President and yet another three to escort him to the House and still another committee of three to write the rebuttal. If ever there was a collection that would take you YEARS to read if you just perused 10 pages at a time over your morning coffee . . . this is it, and it would be time well-spent. 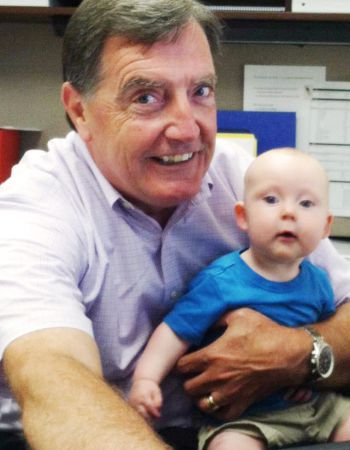 And finally, as a man of faith, I try to find thoughtful works to broaden and deepen my understanding. And in this category, and all other categories for that matter, I am prone to find someone I trust, who is a voracious reader whose opinions I value, and see what it is that they have recently read. One of my friends from back in Idaho has just re-read nearly the entire collection of C.S. Lewis. Not the children’s books, but rather, the weighty theological pieces that we all should wade through at least once in our lives. But, then again, he reads at least a book a day—every day. Books about where we fit in this world and the next are humbling, encouraging and rewarding. The thought-provoking nature of truly weighty books is good for the soul. The book in the link above sits on the shelf at my daughter’s house. When I visit my grandchildren, this is my daily morning companion as I wait for the rest of the family to arise.

Greg Riddlemoser retired from the U.S. Air Force where he served in combat and as a flight instructor on F-4 fighter planes. He was awarded the Legion of Merit and worked as Department of Defense liaison to the National Council on Readiness and Preparedness and to the Homeland Security Council. He has also served as Executive Officer to the Assistant to the Chairman of the Joint Chiefs of Staff and in a similar capacity to an Assistant Secretary of Defense.

He received his BA in Third World History at Boise State University and went on to earn an MA at the Marine Corps University in Military Art & Science, as well as an MS from the National Defense University in National Resource Strategy.

A life member of the American Legion, the VFW, and the Air Force Association, Colonel Riddlemoser enjoys traveling and describes himself as “an occasionally adequate golfer.”

Also available as an eBook and on audio CD.

Also available as an eBook and on audio CD.

One Shot, and you’ve read a book or two from this series, you know Tom was the wrong actor! Jack Reacher is a HUGE man. And he solves his cases in a HUGE way! Also available as an eBook and on audio CD.