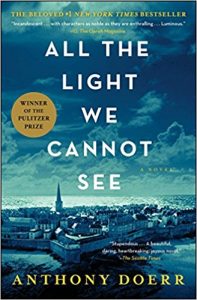 Marie Laure lives with her father in Paris within walking distance of the Museum of Natural History where he works as the master of the locks (there are thousands of locks in the museum). When she is six, she goes blind, and her father builds her a model of their neighborhood, every house, every manhole, so she can memorize it with her fingers and navigate the real streets with her feet and cane. When the Germans occupy Paris, father and daughter flee to Saint-Malo on the Brittany coast, where Marie-Laure's agoraphobic great uncle lives in a tall, narrow house by the sea wall. In another world in Germany, an orphan boy, Werner, grows up with his younger sister, Jutta, both enchanted by a crude radio Werner finds. He becomes a master at building and fixing radios, a talent that wins him a place at an elite and brutal military academy and, ultimately, makes him a highly specialized tracker of the Resistance. Werner travels through the heart of Hitler Youth to the far-flung outskirts of Russia, and finally into Saint-Malo, where his path converges with Marie-Laure.

All the Light We Cannot See

All the Light We Cannot See won the 2015 Pulitzer Prize. If you want a title about the Nazi occupation of France during WWII, these sweeping historical novels are just for you.

After her kind mentor is arrested because of his Jewish heritage, a young baker's apprentice in Normandy engages in discreet resistance activities, baking contraband loaves of bread for the hungry using surplus ingredients taken from occupying forces.

Viann and Isabelle have always been close despite their differences. Younger, bolder sister Isabelle lives in Paris while Viann lives a quiet and content life in the French countryside with her husband Antoine and their daughter. When World War II strikes and Antoine is sent off to fight, Viann and Isabelle's father sends Isabelle to help her older sister cope. As the war progresses, it's not only the sisters' relationship that is tested, but also their strength and their individual senses of right and wrong.

In 1942 Paris, architect Lucien Bernard accepts a commission that will bring him a great deal of money - and maybe get him killed. All he has to do is design a secret hiding place for a wealthy Jewish man, a space so invisible that even the most determined German officer won't find it. He sorely needs the money and outwitting the Nazis who have occupied his beloved city is a challenge he can't resist. When one of his hiding spaces fails horribly, and the problem of where to hide a Jew becomes terribly personal, Lucien can no longer ignore what's at stake.

Paris, July 1942: Sarah, a ten-year-old girl, is brutally arrested with her family by the French police in the Vel' d'Hiv' roundup, but not before she locks her younger brother in a cupboard in the family's apartment, thinking that she will be back within a few hours. Paris, May 2002: On Vel' d'Hiv's 60th anniversary, journalist Julia Jarmond is asked to write an article about this black day in France's past. Through her contemporary investigation, she stumbles onto a trail of long-hidden family secrets that connect her to Sarah. As she probes into Sarah's past, she begins to question her own place in France and to reevaluate her marriage and her life.

As Paris teeters on the edge of the German occupation, a young French woman closes the door to her late grandmother's treasure-filled apartment, unsure if she'll ever return. An elusive courtesan, Marthe de Florian cultivated a life of art and beauty, casting out all recollections of her impoverished childhood in the dark alleys of Montmartre. With Europe on the brink of war, she shares her story with her granddaughter Solange Beaugiron, using her prized possessions to reveal her innermost secrets. As Marthe's tale unfolds, like velvet itself, stitched with its own shadow and light, it helps to guide Solange on her own path.

View more suggestions for All the Light We Cannot See.