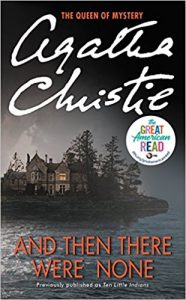 First there were ten-a curious assortment of strangers summoned to a private island off the coast of Devon. Their host, an eccentric millionaire unknown to any of them, is nowhere to be found. The ten guests have precious little in common except that each has a deadly secret buried deep in their own past. And, unknown to them, each has been marked for murder. Alone on the island and trapped by foul weather, one by one the guests begin to fall prey to the hidden murderer among them. With themselves as the only suspects, only the dead are above suspicion.

And Then There Were None

And Then There Were None has had more adaptations than any other single work by Agatha Christie. Many adaptations incorporate changes to the story, such as using Christie's alternative ending from her 1943 stage play or changing the setting to locations other than an island.

If you like the suspense and mystery of And Then There Were None, check out these titles.

View more suggestions for And Then There Were None.