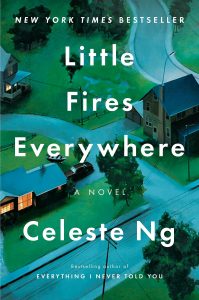 In Shaker Heights, a placid, progressive suburb of Cleveland, everything is planned - from the layout of the winding roads to the colors of the houses to the successful lives its residents will go on to lead. And no one embodies this spirit more than Elena Richardson, whose guiding principle is playing by the rules. Enter Mia - Warren an enigmatic artist and single mother - who arrives in this idyllic bubble with her teenaged daughter Pearl, and rents a house from the Richardsons. Soon Mia and Pearl become more than tenants: all four Richardson children are drawn to the mother-daughter pair. But Mia carries with her a mysterious past and a disregard for the status quo that threatens to upend this carefully ordered community. When old family friends of the Richardsons attempt to adopt a Chinese-American baby, a custody battle erupts that dramatically divides the town—and puts Mia and Elena on opposing sides. Suspicious of Mia and her motives, Elena is determined to uncover the secrets in Mia's past. But her obsession will come at unexpected and devastating costs.

These domestic fiction titles have some of the same themes, especially family secrets and sometimes deadly consequences.

The day Stacey Grant loses her job feels like the last day of her life. Or at least, the only life she'd ever known. As Stacey starts to reconcile her old life with the new - one without professional achievements or meetings, but instead, long days at home with her dog and ailing mother, waiting for her successful husband to come home. She at least has the girls to fall back on, Beth, Melissa, and Gaby. The women had been best friends from the early days of university right through their working lives. But these career women all have personal problems of their own, and when Stacey's redundancy forces a betrayal to emerge that was supposed to remain secret, their long-cherished friendships will be pushed to their limits.

Two couples meet for dinner at a fashionable restaurant in Amsterdam. Behind their polite conversation, terrible things need to be said, and with every forced smile and every new course, the knives are being sharpened.

Joni, Deb, Eden, and Trina have been best friends since high school, sharing a bond that has seen them through their teenage years and into adulthood. But now, time and circumstance are starting to pull them apart as careers, husbands, and babies get in the way. As their yearly vacation becomes less of a priority how can Joni find a way to draw the four of them back together? During a laughter and wine-filled night, the women dare one another to write anonymous letters, spilling their deepest, darkest secrets. But the fun game turns devastating, exposing cracks in their lives and the friendship they share.

Jeff and Kim Sanders plan on throwing a sweet sixteen party for their daughter, Hannah, a girl with good grades and nice friends. Rather than an extravagant, indulgent affair, they invite four girls over for pizza, cake, movies, and a sleepover. What could possibly go wrong? But things do go wrong, horrifically so.

When three women unite for a three-week-long summer vacation in beautiful Lake George, New York, even with the idyllic location as their backdrop, the tensions begin to mount. And they quickly discover that no secret can be kept forever.