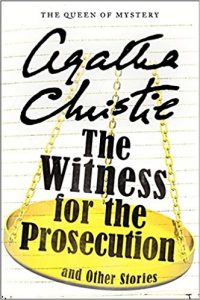 The Witness for the Prosecution by Agatha Christie
When Leonard Vole is attested for the murder of Emily French, a wealthy older woman, his wife Romaine agrees to testify on his behalf but ends up being a witness for the prosecution. This book version contains other short stories by Christie.

Since it's publication in 1925, The Witness for the Prosecution has been turned into a 1957 film and two made-for-tv adaptations in 1982 and 2016. It's been announced that a movie directed by and starring Ben Affleck will be released in October of this year, but no other announcements have been made.

If you want another riveting legal thriller like the short story by Agatha Christie, check these out.

Assistant DA Hammond Cross takes on a high-profile murder case that will ensure him a job in the DA's office. But a Saturday night encounter with a mysterious but irresistible woman turns into a living nightmare. How could he know that she would be the prime suspect in his case?

Ex-con artist Eddie Flynn was a defense lawyer until a disastrous case made him vow to never step foot again in a courtroom. But when his daughter is kidnapped by a Russian mobster on trial for murder, Eddie has to take care of the case whether he likes it or not.

When Stanley Hasting's lawyer boss is charged with the murder of his girlfriend, Hastings must endure a nightmare trial full of sensational stories and a lack of key witnesses.

Cops are being hunted down and murdered while on patrol. Special Agent Dominick Falconetti suspects that the victims have more in common than just being cops. His lover, C.J. Townsend is an assistant state attorney who put plenty of killers behind bars and is acquainted with their motives - especially when she is among the hunted.

On the day before his twenty-first wedding anniversary, David Sullinger buried an ax in his wife's skull. Now, eight jurors must retire to the deliberation room and decide whether David committed premeditated murder - or whether he was a battered spouse who killed his wife in self-defense.

This murder trial is rather complicated: it's the judge's first murder trial A defense attorney in over his head. A prosecutor out for blood and glory. The accused, who is possibly innocent. And the killer, who may have just committed the perfect crime.

View more suggestions for The Witness for the Prosecution.