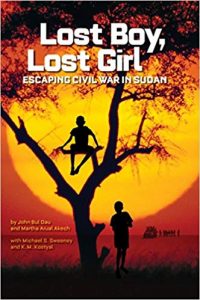 When you’re thirteen, it seems as though everything will be the same always, especially if you live in a traditional culture. For John Bul Dau, life with his large family and many friends as cattle keepers in the Dinka tribe was wonderful. The elders were wise and taught them what they needed to know to become strong men and women. There was time for work and time for play. All of that changed the night the Northern soldiers destroyed their village, as told in John Bul Dau and Martha Arual Akech’s Lost Boy, Lost Girl: Escaping the Civil War in Sudan.

John’s village was completely unprepared for the attack. Many died, and John could not find his family in the groaning dawn. So, he and Abraham, an older member of his tribe, fled from the soldiers. They would narrowly escape death many, many times. John could only assume the rest of his family was dead. Yet besides the kill squads, there were other enemies. Hunger and thirst stalked them more than the native lions, but the two pressed on. For John, it became a dark game of how far they could walk before they collapsed and died.

In a city in southern Sudan, a little girl listened to stories her parents told her, played games, and had a happy childhood. She worried about her younger sister Tabitha’s sickness but trusted her mother and father to take care of them both. She did not understand why her parents took her into the countryside until later, but she learned all too soon that their lives were in danger. When she became separated from her parents, Martha and Tabitha were taken care of by another woman, with several small children of her own. But soon they, too, began the many miles walk to what they hoped would be safety. Still too small to carry her sister on her shoulders as the adults could do, Martha nonetheless always kept her in her sights and walked nearby. As far as she was concerned, she was Tabitha’s mother now and responsible for her safety.

John and Martha were trying to go to the same place, a refugee camp, but it would be years before they would finally be safe. This true account of their very difficult lives, told from their points of view in alternating chapters, is full of hope and courage in the face of starvation, bombs, and crocodile-infested rivers. But they are up for it. As John writes in an early chapter about the rules a Dinka child learns from his elders, “First, they never, ever give up, no matter what odds are against them. And second, like lions, they work together.” Part of John’s story is also told in the prize-winning documentary, God Grew Tired of Us. But Lost Boy, Lost Girl gives a more complete story of how these two lost children found each other and began a new life together.