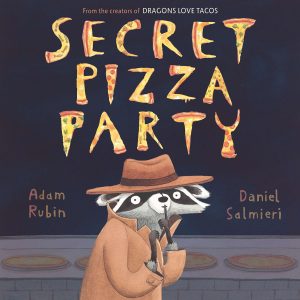 Looking for some cutting-edge reads? Some of the funniest, most irreverent and daring titles the library has can be found in our picture book section. The medium, both short and visual, allows authors and illustrators to take a nutty idea, add great artwork, and build a book that makes reading both fun and funny.

The first time I came across one of these bizarrely hilarious titles was in first grade. The Stinky Cheese Man and Other Fairly Stupid Tales, by Jon Scieszka, takes fractured fairy tales to a whole new level. The Gingerbread Man is replaced by our putrid-smelling title character, the Ugly Duckling grows up to be a really ugly duck, and the Little Red Hen won’t stop yelling at everyone. Accompanied by Lane Smith’s distinctive angular art, Scieszka’s collection is a twisted delight.

As time has passed, a whole new generation has been influenced by Scieszka. Mac Barnett and Jon Klassen definitely carry the torch with their work. Their collaboration on Sam & Dave Dig A Hole mixes silly visual gags with a bit of surreal humor. As the two boys embark on their subterranean adventure, they keep missing all sorts of buried treasures. Then things start to get...weird.

Some of the funniest picture books are those that see the world from a child’s point of view. Carolyn Parkhurst’sCooking With Henry and Elliebelly follows a brother and sister as they present their imaginary cooking show for the reader. The pair handle all aspects of the show, singing the theme song and bickering about costumes (until mom tells them to sort it out). They even take a commercial break, imploring the reader to “BUY A GIRAFFE! BUY SOME PUDDING! NOW! NOW! NOW!” The back-and-forth between these excited characters makes this one of my favorite read-alouds.

This is a list of my favorite funny picture books. Some of them are a little strange, but they all make me laugh, and I hope they do the same for you.

As punishment for disobeying his parents, Billy Twitter must take care of his new pet whale.

A book without pictures might seem boring - until the hilarious truth about reading books is revealed!