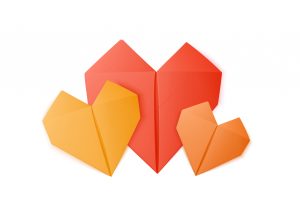 It’s always fun to learn how to do new kinds of arts and crafts projects, but many of them require expensive materials. If you’re looking for a new hobby to take up that’s fun and easy to get into, why not try origami? All you need are some pieces of paper, a set of instructions for the pattern you want, and (for some patterns) a set of scissors. Origami is a centuries-old art form that has seen many different patterns developed over the years. Central Rappahannock Regional Library has many books of origami patterns in its collection, and there are numerous websites that offer free origami patterns as well. If you’re just starting out in art, or are looking for a new skill to master, give origami a try!

Folding From the Past: Origami’s History

Origami has a long history of development in China and other countries in East Asia before it came into the Western world. Modern paper was first invented in China, opens a new window around 105 AD, and paper was introduced to Japan, opens a new window at or before the year 610 AD. Chinese and Japanese paper-folding arts went in different artistic directions. Chinese zhezhi were often creations that looked like manmade objects, such as boats, whereas the Japanese art tended towards creations that resembled animals, plants, and other things in nature. For nearly a thousand years, Japanese paper folding was mainly used in religious ceremonies, opens a new window as paper was quite expensive. It would take until 1764 for the first book on origami to be published, Tsutsumi-no-Ki, which had instructions for 13 ceremonial designs.

Origami became increasingly popular in Japan over the 19th and 20th centuries. The name origami, opens a new window was adopted to refer to all Japanese paper-folding art in 1880. Before this, a variety of different names were used. Akira Yoshizawa, opens a new window was the great innovator of modern origami. He created over 50,000 models and several hundred designs during his life. Yoshizawa invented wet folding, an advanced technique where the paper is made slightly wet before folding to create a more rounded surface. Newer artists continue to innovate with different types of paper, new folding techniques, and more realistic designs.

Guides to Origami at the Library


As you become more skilled, you can take a look at some of CRRL’s origami guides for older folders. Difficult Origami is a step up from the earlier titles listed, allowing you to create designs that use more advanced folding techniques. Origami in Action provides instructions for making designs that allow for “action features,” such as a dinosaur that can roar or a flapping butterfly. Trash Origami teaches how you can make patterns using a wide variety of wastepaper as materials. 10-fold Origami shows how you can use cut paper to create beautiful origami designs. And Picture-perfect Origami allows you to make more complicated designs using very precise instructions.

There are also several websites where you can find simple origami patterns that you can fold. Origami Fun has 12 relatively easy patterns that you can quickly learn and make. You can find over 30 simple designs on Origami Way. The Spruce Crafts has several different patterns to create, some of which incorporate the use of scissors. And Origami Instructions features over 20 designs that are easy for kids to learn and make.

Fold for a Lifetime 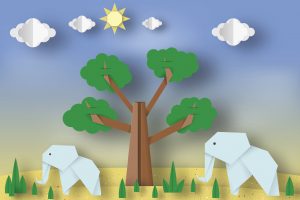 With hundreds of designs you can create, origami is for everyone. You can start with simple, easily made designs and progress to difficult, exquisite works. Origami is easier to get into and understand than ever, thanks to many books, websites, and videos with instructions for patterns. If you want to try origami, CRRL’s collection is a great place to start. We have two book lists for our collection of origami books, one for children, opens a new window and one for more experienced, opens a new window teens and adults.