Hercule Poirot, Miss Marple, Tommy and Tuppence, Superintendent Battle - all of these detectives, some amateurs, some professional - are the creations of one woman, Agatha Christie.

Dame Agatha Christie started writing as a young woman, but it wasn’t until 1920, when her first Hercule Poirot novel, The Mysterious Affair at Styles, was published that her career as a writer of detective fiction took off. Over the next several decades, she wrote 66 novels and 14 short story collections. 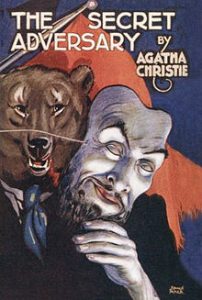 I first started reading Agatha Christie novels as a teenager when I found a box full of her books in paperback at our library’s book sale for ten cents a copy. Over the next several months, I read three mysteries a week, starting with my newly acquired paperbacks and then moving on to our library’s collection.

The thing that stands out in a Christie mystery is her craftsmanship. Every detail matters. Every conversation has a purpose. At the end of the book when the culprit is revealed, you say to yourself, “I should have known it was so-and-so because of this, that, and the other clues.” She was a master at plotting out a story. In her mysteries, Agatha Christie used the stuff of everyday English village life - knitting needles, maids, teacups, and a dressmaker’s accessories - as well as a trip down the Nile River, hidden diamonds, the Mesopotamian desert, and the famous Orient Express.

Her most well-known detective is arguably Hercule Poirot, the retired police detective from Belgium who hates drafts, loves tisanes, and uses his “little grey cells” to solve the mysteries around him. A few of his cases include The Murder of Roger Ackroyd, Death on the Nile, Evil Under the Sun, and Murder on the Orient Express.

Miss Jane Marple is a seemingly harmless old lady who has a talent for solving crimes. Her knowledge of human nature combined with a sharp eye allows Miss Marple to determine the culprit, sometimes before the police have solved the case. Some of her stories are Murder at the Vicarage, A Murder is Announced, 4:50 From Paddington, and Sleeping Murder.

Tommy and Tuppence were first introduced in The Secret Adversary, Agatha Christie’s second novel.  After World War I, both of the young people are unemployed and looking for something to do when they stumble across a missing woman, and their adventures begin. They went on to work together in a book of short stories, as well as the novels, N or M? and Postern of Fate.

Agatha Christie also had a few other recurring characters such as Superintendent Battle, Mr. Quin, and Mr. Satterthwaite.  Her play, The Mousetrap, holds the record for the longest initial run, and she wrote many stand-alone novels, including one of my favorites, Why Didn't They Ask Evans?

If you haven’t yet read an Agatha Christie, I urge you to try one. They are fast, fun, and will keep you guessing until the end. You can get started with my list, The Orient Express and More: