Dorothy L. Sayers was born in 1893 in Oxford, England. She was an only child, and her father, a chaplain and rector, started teaching her Latin when she was six years old.  She later studied at Somerville College, Oxford, and, in 1920, was one of the first women awarded a degree at the university.

Ms. Sayers was a poet, an essayist, a playwright, and a translator of Dante’s Divine Comedy, but she is most well known for her detective mysteries featuring Peter Wimsey, an amateur sleuth who, despite being the younger brother of a duke, loves to poke his nose into the various mysteries that come his way.  Due to these books’ popularity, she came to be known as one of the four “Queens of Crime,” along with Ngaio Marsh, Agatha Christie, and Margery Allingham. 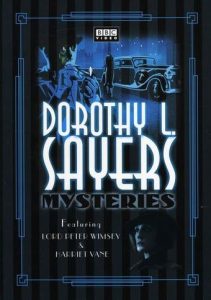 Lord Peter starts off his adventures in Whose Body? in which his friend finds a body in a bath with nothing on except a pair of pince-nez (reading glasses that perch on one’s nose). He goes on to solve murders in his club, at his ancestral home, in an advertising agency, at the seaside, and in the bell tower of a country church. Along the way, he meets Harriet Vane, a mystery novelist accused of murder, and, after several books and mysteries together, they are married. The last full-length book about Lord Peter is Busman's Honeymoon, in which he and his new bride find a dead body in the house where they are staying.

The Peter Wimsey mysteries are considered some of the best-written during the “Golden Age of Detective Fiction” in the 1920s and 1930s. They are intricate puzzles, interwoven with discussions on various subjects such as English bell-ringing, train timetables, advertising campaigns, and plagiarism in scholarship.

Although many of her novels can be read out of order, I recommend starting at the beginning with Whose Body, if you are interested in seeing Lord Peter’s character develop. Or, begin with Strong Poison, the book in which Peter first meets Harriet Vane, on trial for murdering her lover. If you like intellectual mysteries, English country house-type mysteries, and good, old-fashioned puzzles, you will definitely enjoy the Lord Peter Wimsey series.

You can also check out the BBC productions of the Dorothy L. Sayers Mysteries, featuring Lord Peter Wimsey, from the library.