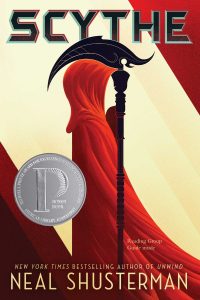 Overall, death has been eliminated.

This is all thanks to a self-aware digital cloud called The Thunderhead, whose totalitarian rule has turned the future Earth into a Utopia.

Everyone can turn back their ages, to any age above 21. So, a 32-year-old you meet might be a 105-year-old human. Everyone is now guaranteed immortality. Well, almost everyone.

Because babies are still being born, someone has to take care of the steadily growing population. Scythe, an organization that is not under the rule of The Thunderhead, has this grueling task. Scythes are charged with "gleaning," or killing, which is now a randomly chosen act based on the "Mortality Age" statistics of death. Many fear the Scythes, who walk around in colorful robes and occasionally carry an assortment of lethal weapons, but many also worship and envy Scythes for their power.

Sixteen-year-olds Citra and Rowan are chosen by mysterious Scythe Faraday to apprentice as Scythes. With Faraday, they learn how to wield dangerous weapons and the art of personal defense, as well as of the difficult philosophy of living as a Scythe. Both Citra and Rowan don't want to be charged with the duty of a Scythe but, because of their voicing their idea in separate chance meetings with Faraday, they are chosen.

"A Scythe never wants the job," Faraday tells them. "That's how you become one."

Neal Schusterman is no stranger in pushing the boundaries with possible future utopias. In Unwind, unwanted teenagers are salvaged for body parts until their 18th birthdays, unless they can beat the system. But in Scythe, Citra and Rowan can't beat the system - they can choose an alternative system. As Citra and Rowan learn the rules of the Scythdom, they began to realize that, although they have both been chosen together to become wielders of death, there are alternative paths to take in the morbid system when the time comes. Whether it is for good or evil - which Scythdom path will they choose to take?

Schusterman, an award-winning author, brings yet another pivotal novel of science fiction to the young adult roundtable of fiction. Scythe's fast-paced, gripping plot, asks the important question of what if. What if our society succumbs to a perfect world like in Scythe - a perfect world, where there is no natural death or killings? What would we, as humanity, become? Are we even considered to be "humanity" anymore? Or are we just a "controlled" substance by a higher being of power, like The Thunderhead? Readers may find some of the answers within Scythe's pages, but not all...stay tuned for a sequel to Scythe, which will hit shelves in 2017.