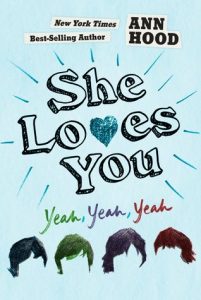 It’s 1966 in Rhode Island, and, for 12-year-old Trudy, everything is psychedelic...and confusing. Her once bustling Beatles fan club has dwindled to just a few members, none of them particularly popular. Trudy’s best friend Michelle is starting to hang out with a different crowd, leaving Trudy behind. Trudy’s father has become so busy with work that she hardly sees him, and, when she does, she’s in the way. To top it all off, after a substitute teacher calls Trudy by her given name, everyone in school starts referring to her as Gertrude, and she can’t stand it.

Trudy knows there is only one way to fix everything - she must go to the Beatles concert in Boston and meet Paul McCartney. Trudy hatches a harebrained scheme to get herself and the straggling members of her Beatles fan club to Boston. Along the way, she meets unexpected characters and learns more about the world...and herself.

She Loves You (Yeah Yeah Yeah) is a fun and thoughtful coming-of-age story, showing just how much times have changed since the Beatles took over... and how little middle school has changed. Trudy is bold, aggravating, and completely relatable as she attempts to take charge of her own life in this crazy new age. The true strength of the story is revealing the 60s, in all its cultural and historical glory, through the eyes of a 12-year-old. The reader sees things through Trudy’s perspective - the raging Vietnam War and its impact on small towns like hers, hippie counterculture, the unparalleled success of the Beatles, and more. Trudy’s story is one of growing up, reaching out to the people around you, and staying true to yourself, even as the whole world changes around you.