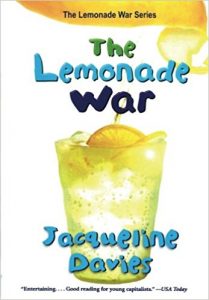 In Jacqueline Davies’ The Lemonade War, Jessie Treski and her brother Evan have a pretty good relationship…usually. But when Evan finds out that Jessie will be skipping third grade and will share his fourth-grade classroom, he gets pretty angry. It’s bad enough that his sister gets all the good grades, but now she is going to mess up things with his friends as well. His anger grows…and grows…and then he explodes, saying awful things to her that he knows he will regret later. Jessie responds and their argument swells until they make a wager with high odds, all riding on who can sell the most lemonade in the last five days before school starts.

Jessie is awesome at figuring out her potential profit from a pitcher of lemonade, but she isn’t really good at reading people’s body language or interpreting what they say. Evan is much better at understanding people, and he uses this to his advantage. But Evan has a hard time planning the business side of things, and so he loses money with poor financial planning. In the midst of Evan’s anger and Jessie’s bewilderment, they both have forgotten what a good team they make together.

The Lemonade War is a fun, light-hearted book that would be perfect for summer reading. A second book, The Lemonade Crime, has recently been published.