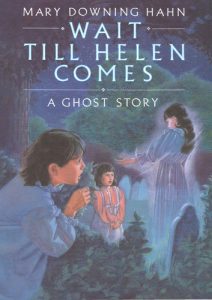 Looking for a spooky story to read in October? Wait Till Helen Comes, by Mary Downing Hahn, is a great book for brave readers ages 10 and up. It’s narrated by 12-year-old Molly, who has moved into a new house out in the country with her 10-year-old brother Michael, her mom, her new stepdad, and his 7-year-old daughter, Heather. The home just happens to be a converted church bordering extensive grounds, ruins, and even a graveyard. Sounds like the perfect setting for something sinister to happen, right?

Heather is having problems adjusting to her father’s remarriage and their move. She is whiny and manipulative, often lying to get Molly and Michael in trouble. Molly is often tasked with watching her younger stepsister, but Heather slips away so Molly can’t find her. On one such day, Molly comes upon Heather talking very animatedly with someone, even though no one is visible. When confronted about it, Heather claims that she was talking to a girl named Helen, who will make Molly and Michael sorry for treating her badly. Everyone else believes that “Helen” is just a figment of Heather’s imagination, but Molly senses something palpable when Helen is present. She comes to believe that Helen is a ghost with bad intentions for their family...and of course, she’s right.

The plot is fast-paced and intense in this classic ghost story. Originally published in 1986, this has remained a favorite read to revisit around Halloween.