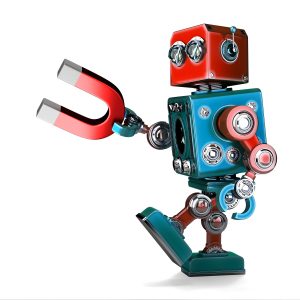 What do the Earth, electric motors, and your computer all have in common?
These things are all influenced by magnets.

The Earth has an outer liquid core that acts like a bar magnet. It gets its magnetism from being near electrical currents beneath the surface. Because the Earth is not perfectly shaped, every so often the direction of the field will change. Scientists have found evidence that this has occurred at least 171 times over the past 71 million years. How do they know that? Magnets!

When magnetic stones were laid down, they naturally aligned their magnetism with whatever was the magnetic field of the time. A lava flow would cement these rocks in place. The change in the magnetism was steady enough to prove a pattern and teach us the way the Earth has changed through time. According to studies done in the past 150 years, the magnetic field continues to change. This time it’s fading out as it gets ready to do another “flip." Not to worry; this probably won’t happen for generations, and the Earth has survived it before.

The Earth is believed to have a solid center about the size of the moon. Just outside of that is a churning molten metal liquid. The solid center, several thousand degrees Fahrenheit, heats this area. When the liquid is heated, it rises, cools, and then sinks down to be heated again. All of this churning causes an electric current and an electromagnetic field along with it. The magnetic shield around the Earth pushes cosmic radiation away from the planet’s middle and out towards the poles. Some birds, turtles, and bees use the same magnetic field to find their way when migrating.

An electric motor uses an electric current to create a magnetic field. The magnetic fields are lined up to push away or repel each other. The repelling causes a push against the rotor and makes it turn. If the rotor is broken and can not turn, heat will build up, and there may be a fire.

The information on your computer is saved on magnetic disks. The hard drive, made of steel, can be easily magnetized. Computers then write a pattern of magnetized and non-magnetized areas onto the surface to hold your data. In previous years, the problem with this storage was that another magnet could erase the information - although that is unlikely to happen today. Flash drives do not use electromagnetism for storage.

If you would like to learn more about magnets and perhaps try some experiments, read on for good source materials.

CRRL Kids: The Power of Magnetism