It takes almost two years from the time the candidates announce they are running to the day that one of them will be sworn into office. Let's take a look at how the winning candidate will get there.

Working with the Two-Party System 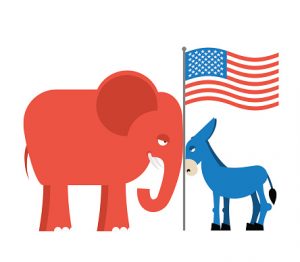 Although our first president George Washington, didn't like a two-party system, that is really what we have in this country. Most candidates spend millions-perhaps over a billion dollars this time round-to campaign. They fly around the country to make speeches, hire staff people, pay for TV ad time, and host conventions. All of that takes money, and big organizations that have been around a long time are excellent at raising money.

There are other parties—the Green Party, the Libertarians, the Constitution Party, and the Natural Law Party to name just a few—but since 1872, America has elected either a Democratic or a Republican party member to the highest office in the land. It's possible that someday a 3rd party candidate will stand a chance of winning, but for now, they are able to use the election system to make the country more aware of their issues.

So, how do the big name candidates get on the ballot? When it comes time for Republicans and Democrats to choose their nominees, the parties go from state to state, having elections amongst themselves, and there are rules that candidates must follow to get on the ballot. There are often a half a dozen candidates in the early races. A lot of time and money is spent by the press to cover these first contests as the country watches to see who will get an early lead.

The rules to vote vary by state. In some states, voters are not required to be registered by their party. Anyone who meets the basic requirements to vote can vote in any primary. This is called an open primary. It has led to "crossing over" votes where people vote for whomever they think is the weakest candidate in the opposing party. In states such as Maryland, you must be registered with a party to vote in its primary. These are called closed primaries. There is a third type of primary called semi-open where voters may cast ballots in either primary, but they must choose which one and only receive a ballot for that party's candidates.

Then there are the caucuses. These are based on the idea of community gatherings and the rules are different from one state to another. The ballots are not always secret. States that use a caucus system are Iowa, Alaska, Colorado, Hawaii, Kansas, Louisiana, Maine, Minnesota, Nevada, North Dakota, and Washington State.

Each state, based on its population, is given a certain number of delegates who are sent to the national convention to declare their people's votes toward electing a national nominee. In the Republican primaries, the state rules are often winner-takes-all, so chosen delegates add up quickly, and an overall winner may soon break away from the pack. In the Democratic primaries, delegates are up for grabs throughout the state. A person who wins the most delegates in California, for example, does not get all of California's delegates unless he or she wins them all, which isn't likely.

Once the delegates have been assigned from primaries and caucuses, it's time to go to a convention. Here the parties add in some "super delegates" who are chosen from important people in the party--often political party leaders and elected officials. They are uncommitted and have not promised their votes to anyone in particular. The Democrats have a lot of these--about 20% of the total convention delegates, which makes close elections such as the one in 2008 very exciting. 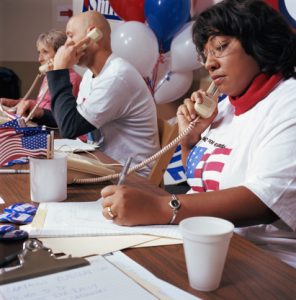 After the conventions, the nominees face off for the next few months before the election. Each will try to give reasons why he or she should be elected and the other nominee should not. There will be television interviews and ads, newspaper and magazine articles, radio spots, and Internet campaigning. People who support the candidates may blog about them, giving their opinions on what they know or think they know. For every strongly-worded ad from one party, there will be a response from the other. Before the election, there are always presidential debates where the candidates argue for the way they see America's future and how they say they will handle its challenges. The vice presidents also debate each other.

Polls are another tool that generates excitement during elections. There are major businesses such as Gallup and Rasmussen that keep track of people's opinions of the candidates during the election. They get their information by telephoning hundreds of "likely voters" and asking them what they think about the candidates. Generally speaking, the more people who are asked a question, the more likely it is that the results are accurate. The "margin of error" is how far off the poll takers think the results might be from reality. It may be given as a number such as 2%. That means that the real numbers may be 2% higher or lower for a candidate if the poll says it has a 2% margin of error.

Our national elections are always held the first Tuesday following the first Monday in November. In order to be able to vote, all states require that people need to be at least 18 years old and be U.S. citizens. Each state may have other requirements, such as not having been convicted of felonies or still serving time, not being declared mentally incompetent, or being a resident of that state for a certain amount of time before the election.

Voters must usually register in advance--except in the state of North Dakota which has no official voter registration and states such as Minnesota, Montana, Idaho, and Wisconsin which have same-day registration. For the rest of us, the cut off date for voter registration varies by state.

If you are eligible to vote and know you will be away from home on Election Day, it is possible to get an absentee ballot in advance. In Virginia, you can either vote in advance at the city or county voter registration office by the Saturday before the election, or it must be received in the mail by state electoral board before polls close on Election Day.

Once the ballots are counted, the winning results are posted by state. It's done this way because different states get a different number of votes in the Electoral College. A big state such as California gets 55 votes. A little state such as Delaware gets three. There are 538 electoral votes split among the states. A candidate must win a majority (270) of the votes to be declared the winner.

What If There Is Cheating? 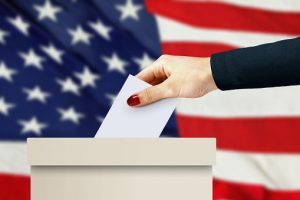 Sadly, people have been cheating at the polls for a long, long time, and many kinds of cheating have developed through the years. In ghost voting, the names of dead people or people who don't exist at all are used to cast ballots. Sometimes absentee votes from disabled people or nursing home residents can be changed so that the votes all go to one candidate by the person submitting them. Sometimes people will sell their votes to one party and then vote in several different precincts. Voting machines can be rigged, and voters can be intimidated into voting "the right way." Any of these practices are called voter fraud or electoral fraud.

The Justice Department and political integrity groups from both parties as well as independent groups are supposed to keep their eyes on the polls on Election Day to try to stop voter fraud. If people are caught and found guilty of voter fraud, they may have to pay penalties or go to prison.

What If There Is a Tie?

If each candidate got 269 electoral votes, it would be up to the House of Representatives to vote and choose a new president.

No matter who wins the presidential election, one thing is for sure: the election cycle will start rolling again before you know it. Listen for buzz on presidential contenders early the next year and expect official declarations by candidates as early as two years before. Then it's on to the primaries and caucuses, the state conventions, and the debates until once again it's Election Day. To learn more about the presidential election, check out the booklists and online resources below.

Books and eResources on Elections for Children in the Library

We have a few booklists made by library staff that will help Grow A Readers and children understand how the election works.

CRRL Kids: The Presidential Election, How It Works

American President: An Online Reference Resource
A much more in-depth look at the presidents and their times, including campaign and election information. From the Miller Center of Public Affairs at the University of Virginia

Presidential Biographies
Has basic life facts for each of the presidents. Part of the Federal Government's 1600 PENN site.

Presidential Elections, 1789-2016
Need to know how many electoral votes each major candidate got in every election and what their parties were? This is the place to go.