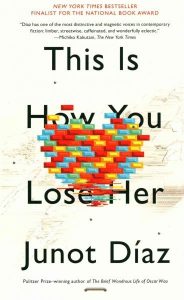 Junot Diaz's versatility enables him to effortlessly shift from elaborate epics to intimate, micro-level storytelling. Just a few years after his sweeping epic, The Brief Wondrous Life of Oscar Wao, opens a new window, Diaz is back with This is How You Lose Her, opens a new window, a collection of overlapping and intersecting short stories that offer brief, nuanced glimpses of complex characters, emotions, and situations.

Although the stories contained within This is How You Lose Her, opens a new window are arranged in a non-linear sequence, they create a fragmentary portrait of Yunior's life and progression from a young immigrant learning English from Sesame Street to a middle-aged man reflecting on a hollow life and deteriorating body.

Throughout This is How You Lose Her, opens a new window, Yunior's street-wise persona keeps him perpetually alienated. Each story seems to revolve around the incremental drift that keeps Yunior in a constant state of heartbreak and loss. Time after time, his recklessness and self-destructive tendencies force his loved ones out of his life. His incessant cheating keeps him from true love, while his stubbornness complicates his relationship with his family, especially when it comes to his brother, Rafa, who dies of cancer.

The litany of ruined relationships in Yunior's life feels surreal at times. However, the repetition helps elucidate the purgatory in which Yunior seems trapped. Each time a relationship begins to disintegrate, he is simply forced to watch its slow, agonizing death. He knows the end is coming but can never seem to stop it. He's smart enough to recognize that his behavioral patterns are perpetuating his misery, but he lacks the power to act on that realization and extricate himself from the cycle.

Limbo and liminality are pervasive themes in Diaz's stories. In addition to the interpersonal purgatory Yunior experiences, he also negotiates the conflicting tensions embedded in his identity. As a Dominican man living in New Jersey, Yunior seems constantly torn between his Dominican roots and the pressures of assimilating to U.S. culture. In “Invierno,” Diaz describes the experience of coming to the United States for the first time. Yunior's father had already been living and working in the U.S. for five years, but when he brings his family from Santo Domingo to New Jersey, the transition is not exactly smooth. The cold weather and unfamiliar setting keep them trapped in their apartment, speculating about what the outside world is really like. With only Sesame Street and the view from their windows to guide them, Yunior and Rafa try to make sense of their new home.

Aesthetically, This is How You Lose Her, opens a new window reflects the conflicting tensions in Yunior's life. Diaz has an incredible talent for combining poetic and graceful prose with street slang, colloquialisms, and Spanish phrases. The shifting registers and forms of narrative address come together as palimpsestic layers, intensifying the reader's immersion in Yunior's life. As a result, Diaz's distinctive stories are infused with gritty realism, melancholy, and heartbreak.

I think each story within This is How You Lose Her, opens a new window is worth reading and contemplating. However, my personal favorite is the final story, “The Cheater's Guide to Love.” In that piece, the tension between depravity and redemption creates a dynamic that would make Charles Bukowski proud. The story describes one of Yunior's terrible breakups and its aftermath. At the end of the story, after five years of depression and various personal failures, Yunior finally rediscovers his enthusiasm for writing. Diaz describes the moment perfectly: “It's a start, you say to the room. That's about it. In the months that follow you bend to the work, because it feels like hope, like grace - and because you know in your lying cheater's heart that sometimes a start is all we ever get.” Ending This is How You Lose Her, opens a new window with such a fatalistic beginning was just one of the numerous ways Diaz managed to get under my skin.

Just like Yunior's numerous lovers, the reader can't help but fall under his spell, seduced by his flawed past and all too human quest for a better life.