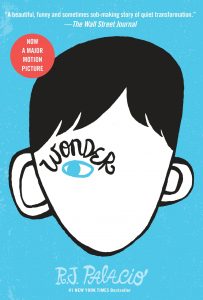 "I won't describe what I look like. Whatever you're thinking, it's probably worse."

August Pullman has a face that only a mother could love, only his mother to be exact. The main character of R.J. Palacio's book Wonder has an extra large forehead. His eyes are much lower than they should be. His mouth always hangs open and his ears are underdeveloped and cauliflower-shaped. What people do not know when they look at August is that they are seeing a very smart, funny, and capable young man.

Mom homeschools me. She used to be a children's book illustrator. She draws really great fairies and mermaids. Her boy stuff isn't so hot, though. She once tried to draw me a Darth Vader, but it ended up looking like some weird mushroom-shaped robot.

The very fact that he has made it to ten years old is a medical miracle, thanks to many operations and a lot of determination from Auggie and his family. He is about to face is the biggest challenge yet, going to a school with other kids his age.

Auggie knows the look people get when they see his face for the first time because he experiences it every day. Whether it's the park or the grocery store, it is always the same look. Even if they are polite, their face still wears it for a split second.

When I looked up at her, Mrs. Garcia's eyes dropped for a second. It was so fast no one else would have noticed since the rest of her face stayed exactly the same.

Not everyone is polite though, not by a long shot, and certainly not in the fifth grade. Auggie is about to see that look quite a bit. It may be uncomfortable at first. Still, August wants to prove it to himself, his parents, and his older sister Olivia that he can handle it.

No one in his class is outright nasty. A couple of kids are actually really nice to him. One month in though, he starts to hear whisperings that touching Auggie gives you the plague. And this one kid, Julian, asks Auggie about his favorite Star Wars character.

"What about Darth Sidious?" he said. "Do you like him?"

Maybe Julian didn't mean anything by suggesting the one Star Wars character whose face gets burned by Force lightning...but maybe he did. People are starting to take sides at Beecher Prep School, and Auggie is unintentionally at the center of it.

Palacio's book is a remarkable story of growth and friendship. We get to hear Auggie's side of the story first, then we hear from others. We meet Via, Auggie's sister who has just entered high school with a new name and an identity no longer tied to her brother. That may seem selfish at first, but Via has rarely been the center of attention in her family since Auggie was born.

We also meet Jack Will and Summer who befriend and defend Auggie at a time that he needs it most. Kindness is a huge element of Wonder. Whenever we meet someone who makes that decision to be kind, it is a brave and heroic act.

All of these different sides of the story help us understand Auggie's life. One of the strongest pleasures of reading is gaining a greater understanding of how other people think and act. Wonder manages to supply those pleasures in abundance.

The book has something for fans of the Diary of a Wimpy Kid series or The Strange Case of Origami Yoda, but it extends far beyond those books in terms of scope. Palacio gives us a lot to laugh, cry and think about. Though August may have a face only his mother could love, he is a character that all readers can adore.

In 2017, Wonder was made into a comedy-drama film, directed by Stephen Chbosky, and starring Julia Roberts, Owen Wilson, and Jacob Tremblay as August. See the trailer below.