If you were visiting the ancient Olympics, you wouldn't see:

Women: The women were forbidden to participate in or even observe the games. Any woman discovered there could be thrown off a cliff! The women (young, unmarried ones) competed in a separate series of foot races called the Heraea, named in honor of Hera, the queen of the gods.

Water Sports: Despite miles and miles of beautiful coastline, water sports such as swimming were never a part of the ancient Olympic Games.

Team Games: In ancient Greece, each athlete competed on his own.

No World Records: No measurements were recorded of the length of a jump or javelin throw. Likewise, no times were kept for the running events. Winners' names might be recorded, however.

The Program for the Ancient Festival*

The procession would reach Olympia from the city-state of Elis, 34 miles away. Judges in purple robes were followed by referees, heralds, athletes, and their trainers. Purification rites and sacrifices were made to the Greek gods. Visitors might be from far away and could include soldiers, artists, philosophers, princes, and historians, as well as fishermen and farmers. Many would sightsee at the temples of Hera and Zeus. The games meant good business for the peddlers and entertainers who would also become part of the Olympic audience.

The chariot races were a popular beginning to the events. A herald announced each horse-and-chariot owner, his father, and his city. The race recalls an old legend of King Oenomaus of Pisa who demanded that no one should marry his daughter who could not first beat him in a chariot race. The equestrian events took place in the Hippodrome (hippo means horse in Greek). Crashes between the chariots, often drawn by four horses at high speeds, could be deadly. In races on horseback, hired jockeys hired would race without saddles. If a horse threw her jockey and went on to win the race, she would still be declared the winner.

After leaving the Hippodrome, the visitors would go to the stadium to watch athletes compete in the pentathlon: discus throw, long jump, javelin throw, stade race, and upright wrestling. These sports were taught to all Greek schoolboys-- and girls as well in Sparta. The pentathletes were crowd favorites for their overall athletic ability.

After a night of feasting and celebration, the third day of the Olympics began with the very solemn sacrifice to Zeus. The rest of the day was devoted to the boys' events. These were for boys over seventeen but under twenty. The included events were similar to those for older athletes: the stade race, wrestling, boxing, and something called pankration, a combination of boxing and wrestling.

First came the foot races. The long race, or dolichos, began as the sun rose over the mountains. This race was about 2 1/4 miles long. The stade race was next. The word stade referred to the length of the stadium, about 600 feet. The stade race gave the city-states a chance to compete in serious rivalry without bloodshed. In this event as in others, the winner was crowned with a wreath of wild olive branches and a headband of ram's wool. The double stade race (diaulos) came last. It gave a second chance to runners over a course that was twice the distance of the classic stade race.

Following the foot races came events in upright wrestling, taught in wrestling schools called palaestrae, boxing (no ring enclosure and no rest periods!), the pankration--wrestling combined with boxing where any moves were legal and the biggest concern was to show no fear. Pankration means all-powerful or all-strong. The last contest was the race in armor, or the hoplite race. The competitors here were usually soldiers rather than athletes. They wore heavy armor and carried shields but bore no weapons. It served as a reminder that the sacred truce of the Olympics was only temporary.

On this, the last day of the festival, no athletic events took place. It was a time to celebrate the victories and honor the athletes. The ceremonies were held at the Temple of Zeus. The statue of Zeus was crowned with a golden wreath to symbolize his triumph over the gods. The champions held palm branches in their right hands, granted by the judges when their victories were first declared. In the ceremony, they would exchange those branches for a crown of wild olive branches. Outside the spectators waited to shower them with sweet-smelling flowers and leaves. Soon they would travel back to their own cities as heroes. 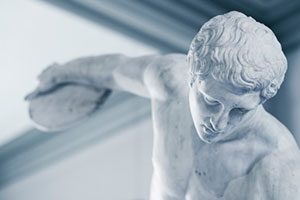 When Greece became part of the Roman Empire, the games continued. Around 312 AD, Emperor Constantine the Great accepted Christianity and made it the official faith of the Roman Empire. In 391 AD, Emperor Theodosius I banned all pre-Christian religions. The last traditional Olympiad was probably held in 393 AD. The Temple of Zeus burned in a fire in 426 AD. In the centuries following, earthquakes and floods of mud erased all sign of the site of the ancient Olympic games.

*The information for this section is taken from the book, Olympic Games in Ancient Greece, by Shirley Glubok and Alfred Tamarin. Check it out for more details on the ancient games and its famous athletes.

Learn More About the Ancient Olympics

Adventures in Ancient Greece by Linda Bailey
Join the Binkertons, twins Josh and Emma and their little sister, Libby, as they head to the Good Times Travel Agency hoping to visit the next Olympic Games - but end up in ancient Greece instead!
This book is written in a comic book format and teaches quite a bit about the ancient Olympic games.

Ancient Greece and the Olympics by Mary Pope Osborne
This tells the facts behind the entertaining Magic Tree House Book, Hour Of The Olympics.

The Ancient Greeks by Charles Freeman
Explore the daily life of the ancient Greeks: attend a chariot race, go to a wedding, see a play on a hillside, and learn about the Olympic games, the beginnings of democracy, and lives of the wealthy and poor.

Olympia by Dyan Blacklock
In the eighth century B.C., the city-states of Greece were in a constant state of war, until King Iphitus stopped the blood-shed by reviving an ancient tradition-an athletic contest to honor the gods. A truce was declared, so the warring groups could come together in peace to compete at the sacred grove at Olympia. Those games would survive for hundreds of years becoming the inspiration for our modern Olympic Games. Has many illustrations and details of the religious services surrounding the events.

Olympic Games in Ancient Greece by Shirley Glubok and Alfred Tamarin
The authors write of the Olympics as they were at the top of their ancient glory, about 400 B.C.

You Wouldn't Want to Be A Greek Athlete!
A look behind the scenes at the ancient Greek Olympics.

5 Myths About the Ancient Olympic Games
People tend to think the past was better than the present, but as the History Channel shows, the ancient Olympics featured professional athletes, cheating, politics, warfare, commercialism and professional trainers.

Ancient Greeks: The Olympic Games
Quick facts, a simple quiz, and a visit to the games with guides (requires Flash) from the BBC.

The Ancient Olympics
"In this exhibit, you can compare ancient and modern Olympic sports, tour the site of Olympia as it looks today, learn about the context of the Games and the Olympic spirit, or read about the Olympic athletes who were famous in ancient times."