February’s guest reader is Daisy Howard-Douglas, an educator, author, storyteller, and community treasure. She spent years as a teacher in Richmond schools, but she always maintained a strong connection with her childhood. Raised in the island town of Morgan City, Louisiana—and truly raised by a village—"Miss Daisy" enjoys sharing stories that draw on her wonderful early years, surrounded and supported by people in different generations.

More than 50 years ago, she married James Wilson Crabbe-Douglas, a native of Westmoreland County, Virginia. In recent decades, they moved back to Westmoreland and now live in its community of Sandy Point.

In 1998, Miss Daisy became the founder and director of The Westmoreland Weavers of the Word Storytellers Guild. They perform at schools, churches, museums, and libraries, sharing traditional tales from the African American experience.

Retirement from formal school teaching certainly hasn’t slowed down Miss Daisy. She serves on the Westmoreland County Board of Education, the Westmoreland County School Coalition Board, the Virginia Storytelling Alliance Board, the Haven Shelter and Services, Inc. and the Central Virginia Health Service. She is a Life and Golden Heritage member of the NAACP and a member of St. Paul’s Catholic Church, as well as the National Education Association.

Besides her local genealogy books, Miss Daisy also writes human-interest stories for area newspapers. She enjoys traveling, creative writing, and storytelling, having told stories at the National Storytelling Network Festival in Jonesborough, TN and at the Freeport Primary School in the Bahamas. 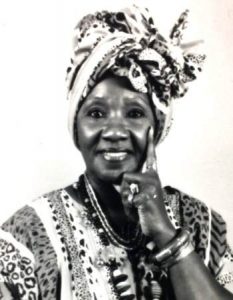 History, particularly local history, is very important to Miss Daisy, and she was a driving force in having three highway markers installed that highlight the contributions of Westmoreland County’s African Americans.

Wherever she has lived, Miss Daisy has lived a life of service. As she said in an interview with the Westmoreland News: “Whenever there’s a need in the community, I always volunteer my services because we can always use an extra pair of hands.”

Her local contributions through the years have been recognized at the state level and nationally, too. She has won more than 200 awards honoring her humanitarian efforts, including the Girl Scouts Commonwealth Council of Virginia’s Pearls of Legacy Award for 43 years of service.

She tells us that Langston Hughes and Barack Obama are among her favorite authors. Miss Daisy finds the messages in President Obama’s books to have heart-warming messages. Of Langston Hughes, she tells us: “His poems embody hope, dreams, aspirations, life and love. I love the poem ‘Dreams,’ which is very short—only 8 lines! It tells us to hold fast to dreams. His dreams, our dreams, and the dreams of future generations! My second poem by Hughes that I truly love is ‘I, Too, Sing America.’ Whenever I recite this poem to an audience, they cry, shiver and tremble. I cry, shiver and tremble with emotions as well!”

A collection of short stories and Cajun recipes that captures the cherished traditions and culture of Louisiana, the 'Bayou State.' Through more than 30 photographs, maps, and unique illustrations, the author recreates the loving, respectful and often humorous relationships that flourished on the sunny island of Morgan City, Louisiana, during her childhood. The book is chock-full of timeless lessons about life, character and family values.

A compilation of favorite recipes collected by the author over a period of 55 years. Many have been handed down with great pride from one generation to another by family members, friends and neighbors of her native state of Louisiana and adopted state of Virginia.

Langston Hughes' uplifting poem is interpreted by Brian Collier's award-winning illustrations that take readers back in time to a train tended by Pullman porters, who played a critical role in the early Civil Rights Movement.

The last living African-American World-War-One veteran meets and becomes a friend to a small six-year-old boy on a beach in Westmoreland County. They bridge the "Generation Gap" as they share a wonderful, respectful, loving, and caring summer on the "Sandy Point" beach.

Langston Hughes did it all: poetry, plays, essays, short stories, and novels. Here is a sampling of some of his best.

Written for the First Daughters by their father, this picture book encourages his children and all children to learn from the examples set by more than a dozen notable Americans.

With these 26 never-before-published short poems, Langston Hughes delights children as they learn about animals and the alphabet. Includes wonderful illustrations from students at the Harlem School of the Arts.

The Tibbs, Howards, and Royals traveled from the state of Virginia and settled in the "Bayou State of Louisiana." For generations, their descendants believed they were from Louisiana. The author vividly shares the lives of these three families as they adjusted and prospered in their new state of Louisiana.