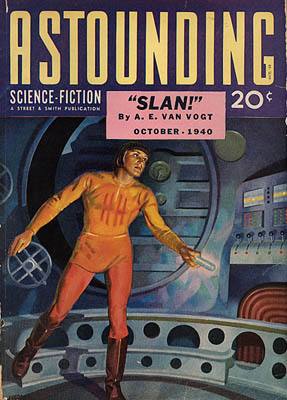 Children of the Lens

E.E. "Doc" Smith's greatest achievement as a writer was the Lensman series, an early work in the field of space opera that would heavily influence Star Wars, Star Trek, and alternate history science fiction. The first book in the series, Triplanetary, was originally published in serialized format in Amazing Stories in 1934. It was republished in 1948 as a novel that had been edited to incorporate several concepts Smith had introduced in later installments. The first half of the novel explains the series' background, introducing the concepts of an interstellar war between benevolent aliens called Arisians, malevolent aliens called Eddorians, and an Arisian eugenic human breeding program designed to produce a superhuman with psionic powers.

Triplanetary initially lays out the timeline of Eddorian and Arisian interference with human history. It begins with the destruction of Atlantis in a nuclear war instigated by the Eddorians and then follows various disasters and civilization collapses instigated by those same Eddorians—such as Nero's reign, World  War I, etc., which culminate in a Third World War involving the use of nuclear weapons.  The second half of the novel details the formation of the Triplanetary League, an alliance of the governments of Earth, Mars, and Venus, and its battles against the Eddorians and another alien race, the Nevians. The serialized version of Triplanetary can be found at Project Gutenberg.

Smith published many other novels in the Lensman series after Triplanetary. In chronological order, they are: First Lensman, Galactic Patrol, Gray Lensman, Second Stage Lensman, The Vortex Blaster and Children of the Lens. These novels chart the advancement of the Arisian eugenics program through the two genetic lines chosen to produce the superhuman. The Lensman novels introduced concepts now considered standard in space opera science fiction, such as cooperative military alliances with alien beings—a precursor of the Federation from Star Trek—female protagonists, and massive interstellar battles.

Many science fiction writers, including Star Wars' George Lucas and Babylon 5's J. Michael Straczynski, have cited Smith's Lensman series as a major influence on their work. Smith's pre-Lensman works are less known today but were no less influential in the world of science fiction. Arthur C. Clarke and Superman creator Jerry Siegel were both influenced by Smith's vision of the future in his Skylark series, and Smith's close friend Robert A. Heinlein read and incorporated aspects of some of Smith's stories into his work.

Predatory Aliens and Other Logical Beings

Another noted science fiction author from this period is A.E. Van Vogt. Van Vogt's first published short story, "Black Destroyer," appeared in Astounding Science Fiction in July of 1939. "Black Destroyer" described a predatory alien that hunted and killed the crew of an exploration spaceship, a theme that became the basis of later science fiction stories and films, such as Alien. His 1946 novel Slan detailed the struggle of an evolved superhuman to survive against extermination squads of ordinary human beings. It became one of Van Vogt's most popular works. Most of Van Vogt's early novels, such as The Voyage of the Space Beagle and The Weapon Makers, were originally published in serial formats in science fiction magazines.

Van Vogt used a very systematic approach to storytelling. He created his own logical system, which he called "Null-A", or non-Aristotelian logic. This was a type of logic that emphasized intuitive, deductive reasoning. Van Vogt published three novels that utilized this system: The World of Null-A, The Players of Null-A, and Null-A Three. He also developed a system of writing in groups of 800 words, introducing new conflicts and complications at the end of each 800-word block. In spite of these very precise methods of writing, Van Vogt's output became very sporadic for a period in the 1950s, when he worked with L. Ron Hubbard for a brief time on Dianetics, the precursor to Scientology. Van Vogt became unhappy with Hubbard's concepts and left the movement. He reported that he was harassed by Hubbard's followers during this period and only returned to writing at the request of fellow science fiction writer Frederik Pohl.

Van Vogt's books from the 1960s onward were conceived as unified texts rather than short stories or serialized chapters for science fiction magazines. This was due to the fact that many of the literary magazines which published science fiction had ceased publication. A. E. Van Vogt died in 2000, and his last book, To Conquer Kiber, was published in 1985. Van Vogt was acclaimed and cited as an inspiration by many writers, including Phillip K. Dick, Harlan Ellison, and Paul Di Filippo.

These Golden Age authors are responsible for inspiring many modern, popular science fiction writers. Smith and Van Vogt were responsible for incorporating new philosophical constructs and deeper characterization into the field of science fiction writing than had been exhibited during the more escapism period of the 1920s and 1930s. They created works that explored the concepts of super-beings, alien/human interaction, and interstellar travel in clever and innovative ways, and deserve to be considered classic authors of 20th-century literature.