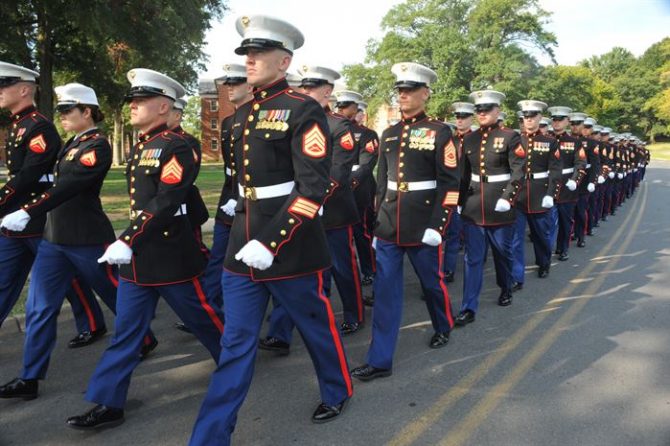 "That two battalions of Marines be raised consisting of one colonel, two lieutenant colonels, two majors and officers as usual in other regiments, that they consist of an equal number of privates with other battalions; that particular care be taken that no person be appointed to office or enlisted into said battalions, but such as are good seamen, or so acquainted with maritime affairs as to be able to serve to advantage by sea." (Resolution of the Continental Congress, 10 November 1775.)

November 10 marks the birthday of the United States Marine Corps. On this day in 1775, the Continental Congress passed a resolution calling for the creation of two battalions of Marines to serve the new nation. Each year in Marine posts throughout the world, traditions such as the birthday ball and the cutting of birthday cake continue, bonding generations of warriors together as they celebrate their shared brotherhood.

These fighting men and women are an elite group, and well they know it! Throughout their history, they have been given the specialized and often dirty jobs deemed necessary to win wars. From clashes with Barbary Pirates to the special ops of today, they have gloried in their victories and stuck out the rough times in between. When times of war are upon us, the Marines can be counted on to play key roles in the fighting.

Learn more about the fascinating history of the Marine Corps in the library and on the Internet.

U. S. Marines have appropriated the term esprit de corps as their own--their esprit, their Corps. The personal ties between a Marine and his Corps are strong. Marines believe in their Corps. They also believe that they are the best. They insist that the "M" in "Marine" be capitalized. The highest accolade they can bestow on a member of another service is 'He would make a good Marine.'

A Fellowship of Valor

Read about the Marines' fighting spirit and weaponry. Clancy goes inside a seaborne emergency response team used in both peace-keeping and warfare.

The Germans called the Marines teufelhunden or "devil dogs" for their invincible spirit in France. At Belleau Wood, Soissons and Mont Blanc, they fought alongside the regular army, ultimately uprooting their enemies from trenches, tunnels, and caves.

What does it take to be a marine? Ricks follows a platoon of recruits through eleven weeks of boot camp at Parris Island and examines what goes into the creation of a military elite.

Read more books about the marines from the library.

First Offensive: The Marine Campaign for Guadalcanal
http://www.ibiblio.org/hyperwar/USMC/USMC-C-Guadalcanal.html
"In the early summer of 1942, intelligence reports of the construction of a Japanese airfield near Lunga Point on Guadalcanal in the Solomon Islands triggered a demand for offensive action in the South Pacific." Maps, photographs, and text accompany this 50th Anniversary USMC commemorative site.

The National Museum of the Marine Corps
"The National Museum of the Marine Corps is a lasting tribute to U.S. Marines — past, present, and future. Situated on a 135-acre site adjacent to the Marine Corps base in Quantico, Virginia, the Museum’s soaring design evokes the image of the flag-raisers of Iwo Jima and beckons visitors to its 118,000-square-foot structure. World-class interactive exhibits using the most innovative technology will surround visitors with irreplaceable artifacts and immerse them in the sights and sounds of Marines in action."

The Navajo Code Talkers
https://navajocodetalkers.org/
In World War II, the Marine Corps recruited Navajos to their ranks to act as code talkers, enabling the United States to quickly and accurately relay messages that were indiscernible to enemy spies. This is part of their story.

Small Unit Action in Vietnam, Summer 1966
http://www.au.af.mil/au/awc/awcgate/usmchist/vietnam.txt
Originally printed in 1967, this official publication is a very readable and yet historically accurate war story which teaches lessons in sound military tactics.