To the Europeans, the West was a great unknown. Many people believed that over the western sea there was nothing but darkness and danger. Yet throughout the past, travelers tried to find out what was on the other side of the water. There are very few traces of those first explorers. They lived in times when most people could not write, so stories of their discoveries were passed down as tales told around hearth fires. Sometimes they were believed, sometimes not. Russell Freedman’s Who Was First? Discovering the Americas looks at the evidence behind this puzzle.

The most famous explorer of all is probably Christopher Columbus, an Italian who sailed for Spain and discovered what was to Europeans a New World in 1492.  But Columbus did not sail to try find this vast new world. He was simply looking for a faster way to trade with India. Columbus renamed the island San Salvador or "Holy Saviour", and he found it to be a very beautiful place. Columbus: Opening Up the New World, by Stephen Feinstein, lays out Columbus’ life story and how his dangerous explorations helped lead to major European colonization in the Western Hemisphere.

Younger students can try The Story of Columbus, a Level 2 reader by Anita Ganeri.  Students can also learn about this explorer through the 30-minute, animated video, Christopher Columbus. 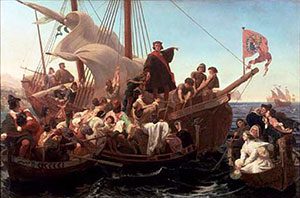 There were other early European explorers besides Columbus—Pizarro, Cortés, Hudson, Cabot and La Salle to name but a few, but there is probably no more gripping true adventure story than that of Sir Francis Drake. This explorer was also a privateer in Queen Elizabeth's service. He sailed around the world and commanded part of the English Fleet in the sinking of the Spanish Armada. He was called "El Draco" or the Dragon by his enemies for his ferociousness. Read his story in The Sea King: Sir Francis Drake and His Times, by Albert Marrin.

The library has many books on explorers for you to read. All of these people wanted something very much, whether it was to be the first person from his land to see this new place or to gain lots of treasure or to teach the people they met their own ways. Explore with the explorers both in your library and online.

Try Encyclopaedia Britannica - Kids or their regular edition - for in-depth research. Kids InfoBits may help younger students. Need more biographical information? Biography in Context will help out. You will need a CRRL card to use these databases.

Zoom Explorers
Created by: EnchantedLearning.com
Search by name, place or time period. Listings are about a paragraph long and often include pictures. A good place to browse and choose an explorer for further study. 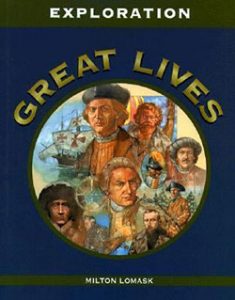 Use our catalog to find books about specific explorers or read about many of them at a time in these books:

Against All Opposition: Black Explorers in America by James Haskins
Surveys the lives and adventures of Black explorers who helped discover new worlds.

Explorers and Discovery: A Reference First Book by Cass R. Sandak
A dictionary detailing the achievements of famous and lesser-known explorers, and listing the geographical areas explored by them.

Explorers of the Americas before Columbus by George deLucenay Leon
Examines the voyages of explorers who reached the shores of North America before Columbus. Discusses Eric the Red, Leif Ericsson, the Norse settlements, and ancient visitors to South and Latin America.

The Search for the East by Peter Chrisp
Discusses Portuguese voyages of discovery and exploration around Africa and Asia in the fifteenth and sixteenth centuries.

The Spanish Conquests in the New World by Peter Chrisp
A history of Spanish exploration and conquests in America, with an emphasis on Cortes and Pizarro.

Who Was First? Discovering the Americas by Russell Freedman
The author looks at all the other people (Vikings, Chinese, and the people we call Native Americans) who are believed to have discovered America—long before Columbus.