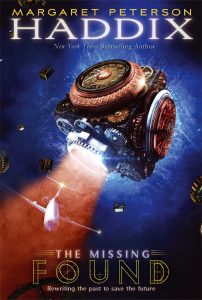 In Margaret Peterson Haddix’s Found, Jonah Skidmore feels like an ordinary thirteen-year-old boy. His family consists of a slightly annoying but smart younger sister named Katherine and a mom and dad who love him unconditionally. Jonah is adopted and has known this fact for a while but it’s never been a big deal for him because his parents have always been open about it to him. Life definitely feels normal for Jonah. That is, until the mysterious letter arrives--the letter that contains just six words: YOU ARE ONE OF THE MISSING. The letter does not contain a signature or a return address. Who sent it? Where did it come from? What does it mean?

Jonah at first believes it to be a prank. But when his friend Chip Winston receives the exact same letter they begin to question it. After some digging around, Chip discovers that he, too, is adopted and the fact that they are both adopted is tied to why they both received the mysterious notes. Through the help of Jonah’s sister Katherine, Jonah and Chip learn that the notes are linked to the strange and shifty circumstances that surround both Jonah’s and Chip’s adoptions. The three of them embark on a journey to get to the bottom of this mystery that ends up involving an airplane that materializes out of thin air, a huge smuggling operation, and the FBI. What they find is a mind-boggling conspiracy that propels them into a whirlwind of an adventure through time. Who are they? Where did they come from? Or, rather, when did they come from?

Found is the exciting first book in master storyteller Margaret Peterson Haddix’s The Missing series. Haddix delivers an action-packed story where she weaves high-tech science into an exciting plot. The reader will feel as if they are on the adventure with Jonah, Chip, and Katherine. The characters are realistic and likable and their relationship with each other is genuine. This book will keep you guessing and on the edge of your seat the entire time. This is a page-turner that kids will love, and the ending will surely blow you away and leave you eager to get your hands on the sequel, Sent.