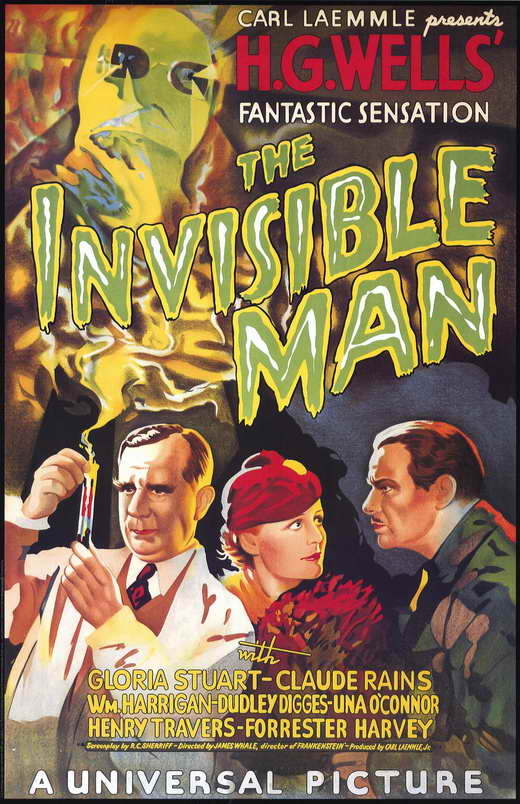 Many of his readers were surprised to discover that Wells had adopted a third person narrative instead of the first person for this particular novel. The protagonist, Dr. Griffin, is a scientist who is interested in optics. He learns how to invent a way to change a body’s refractive index to that of air. Thus, the body neither absorbs nor reflects light, allowing for invisibility. The ambitious Griffin successfully completes the procedure on himself, but he can’t seem to figure out how to reverse it.

Not only does Wells use a lurid science fiction style writing in The Invisible Man, he also adds an element of sheer horror. The way Griffin has to dress in order for others to see him is frightening: wrapped in bandages from head to foot, with a fake pink nose and a wide-brimmed hat. Like Frankenstein’s creature and the Wolf Man, the Invisible Man’s appearance is rather surreal.

There was much praise for H.G. Wells and his mysterious, bandaged figure with a shattered dream. In 1933, James Whale, the popular director of Frankenstein (1931), was asked to lead a Universal Studios film again, based on Well’s novel The Invisible Man. Claude Rains, who also starred as The Phantom of the Opera (1943) played the mysterious Doctor Griffin. Although there were considerable differences in the screenplay of the film versus the novel, The Invisible Man was the most successful horror/science fiction film at the box office since Whale’s Frankenstein (1931). H.G. Wells even commented that he enjoyed the film.

The film was also known for its groundbreaking visual effects. Three men came up with a contraption of wires to represent the Invisible Man with no clothes on, and, while the Invisible Man was half-clothed, Claude Rains wore a suit of black velvet against a black velvet background to conceal his skin. A matte filmography process was used to lay over the shot of the actor against the background. Many images of the Invisible Man disappearing were treated with hours upon hours of work in a laboratory.

Although the 1933 film was a success, The Invisible Man Returns (1940) did not have any returning actors from the first film and flunked at the box office. It was the same with the other installments as well: The Invisible Woman (1940), Invisible Agent (1942) and The Invisible Man's Revenge (1944).

In 2020, an updated version of the classic 1933 film was released, starring Elisabeth Moss, Oliver Jackson-Cohen, Storm Reid, and Aldis Hodge. It follows a woman who believes she is being stalked and gaslit by her scientist ex-boyfriend - even after his apparent suicide - coming to the conclusion he's invisible. The film was widely regarded as one of the best horror films of the decade by critics and fans alike.