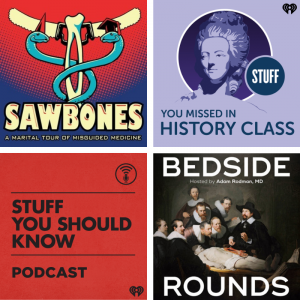 When it comes to the science of medicine there is much to be grateful for. Vaccines, blood typing, x-rays, antibiotics: all make huge differences in how we are treated for accidents and ailments. For those of us who are perhaps morbidly curious, or at least not terribly squeamish, exploring the history of medicine is fascinating.

However, it’s not a pretty picture, ranging from the deadly and disgusting to the downright silly ways people diagnosed and treated illnesses and injuries. Deliberate bleeding was often a popular method of treating issues, opium was thought to be a safe additive to medicine to soothe teething babies, and germs were not even part of the vocabulary. Learn about Phineas Gage who survived having a metal pipe shot through his head and how Dr. John Snow proved cholera was a water-borne illness caused by fecal matter. Then there was the time when wine and cocaine mixed together was thought to be a healthy energy drink - and so was water with added radium.

If the horrible - but true - history of medicine is something you are interested in, why not try some of these podcasts and book pairings?

Sawbones is a podcast presented by the husband-and-wife team of Justin McElroy and Dr. Sydnee McElroy, which features fun banter between Sydnee, a practicing physician, and Justin, a podcaster and writer. As of this writing, it is the most popular medical podcast in the world. They have recently published a book, Sawbones, which pairs well with the book Quackery.

Stuff You Missed in History Class & Stuff You Should Know

Stuff You Missed in History Class has been a long-running podcast delivering episodes that cover obscure moments in history and take deeper dives into ones where we think we know all the facts already. The episodes that cover medical history range from the 18th-century case of polyphagia (insatiable hunger causing the afflicted to even consume non-food items) to ancient plastic surgery. Its partner podcast, Stuff You Should Know, also has a medicine tag, which includes topics such as collective hysteria and amputation. To go along with these podcasts, I suggest trying Happy Accidents and The Mystery of the Exploding Teeth.

Bedside Rounds is presented by medical educator Adam Rodman, in partnership with the American College of Physicians. Topics range from "The First Opiate Epidemic" that occurred almost a century ago, to the assassination and failed medical attempts to save President James Garfield. Find out why the podcast's tagline is "Because Medicine is Awesome." Try out these titles: Under the Knife and Nine Pints.

The Story of Medicine

Enjoy a good documentary? I suggest this fascinating, three-episode look into the development of modern medicine: The Story of Medicine. Fair warning to those with weak stomachs: while the documentary is not exceptionally graphic, the episodes cover pain and pain prevention, infections, and poisons. Pair this documentary with The Making of Modern Medicine.

Last but not least, there exist medical adult coloring pages. Yes, that's right - adult coloring pages ranging from medieval dancing skeletons to a phrenology chart, all free, courtesy of the U.S. National Library of Medicine. Interested in other coloring pages? This is part of the larger annual museum and library project #ColorOurCollections. Looks like these skeletons really know how to party!

After learning more about the history of medicine, it's likely you'll never look at your prescriptions the same way again. There's something to be said for knowing that today all the various drugs and additives go through the Food and Drug Administration first. I will leave you with one fact - though you probably want another gross medical fact like you need a hole in your head. Related: have you thought about trepanation? Just kidding!

Did you know leeches are still sometimes used in the medical field? Leaches' abilities to make tiny incisions with its teeth, pump in a local anesthetic and anticoagulant, and absorb several times their own weight in blood have rendered them very useful tools in infection cases.

Now, you, too, can be the hit at dinner parties, dispensing historical medical facts to everyone - they'll love it, I'm sure!