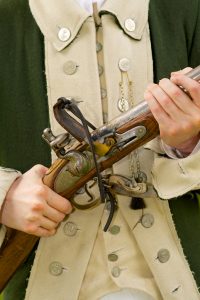 James Hunter (1721-1784) was the son of James Hunter, merchant of Duns, Scotland. His uncle, William Hunter, settled in Virginia in the 1730s and was one of the first Scottish merchants to settle in the Fredericksburg area. James was brought up in the mercantile business and soon began making business trips to Virginia during which time he also bought property here.

By 1749 he had settled permanently in Virginia becoming a junior partner in his uncle’s Fredericksburg store and a trader of slaves. Owing to the failing health of the elder Hunter, James was soon carrying out most of the daily activities of the store....

The exact date of James Hunter’s earliest involvement in the iron industry is uncertain. By the mid-1750s Hunter was branching out of the mercantile business and developing planting and industrial interests. He was making extensive land purchases in Fredericksburg and in the surrounding counties. By 1761 he was shipping tobacco and pig iron to Liverpool which indicates that sometime shortly prior to that time he had at least developed the rudimentary processing of iron.

The foundry produced supplies for the military as well as commonplace items such as hinges, bridle bits, curry combs, kitchen implements, traveling forges and the famous Farmer’s Friend plow. This was a single horse plow with a replaceable wooden beam that was light and easily disassembled for carrying in a wagon. Much of the prairie was plowed with the “Farmer’s Friend” and it was said that the West could not have been settled without it.

Very often other industries and shops were associated with iron works. Since the site already provided water power, it was usual to find a grist mill as part of the forge complex. Hunter’s foundry also included a store, counting house, smith’s shop, tannery, grist mill, sawmill, forge mill, and merchant mill. The grist mill ground grain brought by local farmers and also provided flour for the ironworkers. A merchant mill, on the other hand, handled huge quantities of flour and meal and shipped the finished products to distant ports. The sawmill cut logs into boards and the forge mill powered huge hammers that shaped the steel. Other businesses associated with the iron works included blacksmith shops, a tannery, loom, and small general stores. By the time of the Revolution, Hunter’s iron works was one of the largest single industries in the New World and from about 1775 to 1781, it was the largest iron works in the colonies. At one time, in fact, the government owed Mr. Hunter some $930,000 for items made at his foundry.

It is unknown how much of the foundry’s success was a result of Hunter’s involvement or of the abilities of his manager, John Strode. Strode was a Pennsylvania Quaker who was originally hired as a plantation overseer for one of Hunter’s Stafford plantations. Contemporary Henry Banks described Strode as “farmer, mechanic [and] skilful and accurate accountant.” Sometime prior to the Revolution, Strode became manager of the iron works. At the outbreak of the war, he returned to Pennsylvania and recruited mechanics of many vocations. Under his management, the foundry was soon producing muskets, pistols, carbines, camp kettles, spades, shovels, and any other iron objects required for the war effort.

James Mercer wrote to Thomas Jefferson on April 14, 1781, describing the importance of the iron works:

It is from Mr. Hunter’s Works that every camp kettle has been supplied for the continental and all other troops employed in this State, and to the southward. All the anchors for this State and Maryland and some for the continent have been produced from the same works; that without the assistance of the bar iron made there, even the planters hereabouts and to the southward…would not be able to make bread to eat.

In June of 1776 Hunter showed a sample musket with bayonet, sheath, and steel ramrod to the Revolutionary convention. The members were so pleased that they made the gun standard and asked him to make as many as possible within the next twelve months.

In addition to the musket, Hunter was producing three other types of guns at his foundry—a .69 caliber, 9-inch, smooth bore pistol; a .65 caliber, 8.75-inch smooth bore pistol; and an unusual weapon called a “wall gun” or “amusette.” Essentially a large musket, it filled the gap between a shoulder arm and a cannon. The wall gun was semi-portable, though not easily handled from the shoulder due to its 53.5-pound weight, and could propel a large ball for a long distance. The barrel was rifled and the stock was manufactured with a swivel rod to support the barrel from a fixed position such as the top of a wall.

That same year, William Fitzhugh of Chatham advanced money to help pay for the muskets produced by Hunter’s forge. The following year Fitzhugh was appointed commissioner to encourage the expansion of the operation to furnish materials for the army and navy.

Patrick Henry was also impressed with the works and, in 1777, he put before the General Assembly an Act for the encouragement of the Iron Works.

Britain recognized the importance of the iron works, also, and attempted to take them on two occasions, in February and again in June of 1781. General Weedon’s job was to protect the iron works and in this endeavor he was successful. The Revolution caused little damage in Stafford.

It is highly doubtful that the Accakeek mines produced adequate iron for the Rappahannock Foundry. Hunter was also shipping iron from Principio in Maryland and Jefferson’s Notes on Virginia states that in 1781 Hunter was annually processing three hundred tons of bar iron from Maryland pig. He was almost certainly shipping ore down the Rappahannock from mines in Spotsylvania, also.

Early in the war, Hunter had made an agreement with the General Assembly that his artisans would not be drafted and sent to fight. The Assembly broke that promise in February 1781, thereby causing Hunter to close his small arms factory. The state was already deep in debt to Hunter. In an effort to raise money, he allowed the state to take over his stock of coarse woolens, enough to clothe from one hundred fifty to two hundred men. For these goods, the state might pay him in tobacco at fifty pounds per hundredweight of wool. In March the legislators attempted to correct their mistake by passing an act to exempt ironwork artisans from military service, but the damage to Hunter’s operations had already been done. Hunter’s workers were in the army.

Later in 1781, Hunter managed to procure more artisans and he put himself in debt to expand his works. He began producing traveling forges I October. The war was over after Yorktown, however, and the Assembly, eager to encourage him before and during the war, now would not pay him the heavy debts they had incurred. A true patriot, he had invested much of his own fortune in the forge but was forced for lack of funds to dismiss all his workers in December 1782, ending foundry operations.

James Hunter died in 1784. Unfortunately, his record books, ledgers, and personal papers were lost and there is little that sheds light on the career or personal life of this fascinating individual. In his will of November 18, 1784, James left the bulk of his estate to his brother, Adam, who spent many years disposing of the property. In 1794 Adam advertised in The Virginia Herald the sale of James’ plantation Stanstead (see article this chapter)*:

…his late Mansion House, in Stafford county, containing near four hundred acres of Land, lying on Rappahannock river, opposite the town of Fredericksburg, of which it commands a complete view: There is on the Plantation about thirty acres of valuable meadow, and a large peach and apple orchard; the Ferry Landing on the north side of the river and Boats will be sold with this tract. This seat, in point of elegance, beauty, and many other advantages, is equal, no: superior, to any in this part of the country.

An additional 385 acres adjoining the plantation was offered for sale, also. Of this property, forty acres of meadow was suitable for corn or wheat. Money from the sale was to be applied to paying the debts of the testator.

An advertisement for the sale of Hunter’s forge complex appeared in the May 18, 1798 Fredericksburg Herald. From the description in the advertisement we are given an idea of the impressive size of his operation:

The Iron Works and Mills…consisting of a Forge 128 feet by 51 feet, eight fires and 4 hammers, a coal house 80 by 40 feet, a merchant mill 70 feet by 36 feet with two pairs of French burnstones [burrstones]…a grist mill 20 feet by 18 feet…a saw mill 55 feet by 11 feet…Contiguous thereto are a stable 54 feet by 27 feet…a nailery, a tanyard, coopers, carpenters, and wheelwright shops…and houses for the managers and workmen.

The forge didn’t sell until the first quarter of the nineteenth century when it was bought by Joseph Ficklen. The operation never again produced as it had in Hunter’s time; in fact, it is uncertain if it was ever used as a forge at all after Ficklen’s purchase. Tax records after the Civil War are scant but by 1870 the property is listed as 371 ½ acres with no buildings; they may have just collapsed from neglect.

Hunter invested much of his fortune in his iron works and seems never to have received full compensation from the government. Contrary to local legend, however, James Hunter was not destitute when he died. His will provided £1,000 legacies to cousins on the condition that they not bring suit against his estate because of disputes over his father’s estate or that of his brother, William. The stipulations attached to the gifts suggest that family dissension had never been resolved to everyone’s satisfaction. Hunter was buried behind old Union Church in Falmouth.

This article originally appeared in They Called Stafford Home: The Development of Stafford County, Virginia, from 1600 until 1865, by Jerrilynn Eby, and appears here with the author’s gracious permission.