Dragged to a treacherous magical land she only knows about from stories, Feyre discovers that her captor is not an animal, but Tamlin, a High Lord of the faeries. As her feelings toward him transform from hostility to a fiery 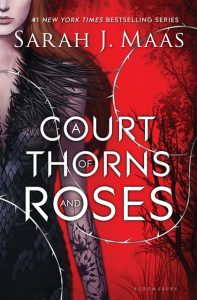 passion, the threats against the faerie lands grow. Feyre must fight to break an ancient curse or she will lose Tamlin forever.

A Court of Thorns and Roses

If you like the Court of Thorns and Roses series, check out these other exciting fantasy fiction young adult titles with similar themes.

Belle is a lot of things: smart, resourceful, restless. She longs to escape her poor provincial town for good. Belle also happens to be the captive of a terrifying, angry beast. And that is her primary concern. Shocked and confused, Belle must work with the Beast to unravel a dark mystery about their families that was twenty-one years in the making.

Jude, seventeen and mortal, gets tangled in palace intrigues while trying to win a place in the treacherous High Court of Faerie, where she and her sisters have lived for a decade.

All sixteen-year-old Tommin wants is to make beautiful shoes and care for his beloved grandmother, but his insatiable need to steal threatens to destroy everything. When mysterious Lorcan Reilly arrives in town with his "niece," Eve, Tommin believes the fellow wants to help him. Instead, Lorcan whisks him off to the underground realm of the Leprechauns, where, alongside Eve, he's forced to prepare to become one of them. As Lorcan's plans for his "gold-children" are slowly revealed, Tommin and Eve plan their escape.

In this whimsical standalone tale, readers follow Catherine, the Red Queen in Alice in Wonderland, simultaneous courtships with the jovial king and his court joker, Jest, whose earnest boyishness makes him far more charming than his royal boss. Caught between her own desires and her mother's stop-at-nothing goal to make her daughter queen, Catherine must decide how much she will risk for a future with Jest.

In a world divided by blood—those with common, Red blood serve the Silver-blooded elite, who are gifted with superhuman abilities—seventeen-year-old Mare, a Red, discovers she has an ability of her own. To cover up this impossibility, the king forces her to play the role of a lost Silver princess and betroths her to one of his own sons. But Mare risks everything and uses her new position to help the Scarlet Guard—a growing Red rebellion—even as her heart tugs her in an impossible direction.

Seventeen years ago, an eclipse cloaked the kingdom of Relhok in perpetual darkness. In the chaos, an evil chancellor murdered the king and queen and seized their throne. Luna, Relhok's lost princess, has been hiding in a tower ever since. When she meets Fowler, a mysterious archer braving the woods outside her tower, Luna is drawn to him despite the risk. With every threat stacked against them, Luna and Fowler find solace in each other. But with secrets still unspoken between them, falling in love might be their most dangerous journey yet.