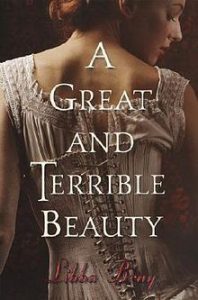 After the suspicious death of her mother in 1895, sixteen-year-old Gemma returns to England, after many years in India, to attend a finishing school where she becomes aware of her magical powers and ability to see into the spirit world.

A Great and Terrible Beauty

These witchy and paranormal teens have trouble breathing down their necks. Can they use their magic to dig themselves out?

In a small South Carolina town, where it seems little has changed since the Civil War, sixteen-year-old Ethan is powerfully drawn to Lena, a new classmate with whom he shares a psychic connection and whose family hides a dark secret that may be revealed on her sixteenth birthday.

In 1837, as seventeen-year-old twins, Persephone and Penelope, are starting their first London Season they find that their beloved governess, who has taught them everything they know about magic, has disappeared.

In the early twentieth century in Swampsea, seventeen-year-old Briony, who can see the spirits that haunt the marshes around their town, feels responsible for her twin sister's horrible injury until a young man enters their lives and exposes secrets that even Briony does not know about.

Alex is a bruja and the most powerful witch in her family. But she's hated magic ever since it made her father disappear into thin air. When a curse she performs to rid herself of magic backfires and her family vanishes, she must travel to Los Lagos, a land in-between as dark as Limbo and as strange as Wonderland, to get her family back.

Five sisters who live with their merchant father in Transylvania use a hidden portal in their home to cross over into a magical world, the Wildwood.

View more suggestions for A Great and Terrible Beauty.