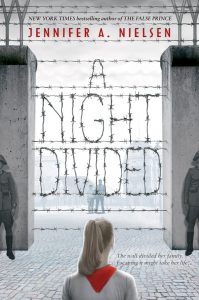 When the Berlin Wall went up, Gerta, her mother, and her brother Fritz are trapped on the eastern side where they were living, while her father and her other brother Dominic are in the West - four years later, now twelve, Gerta sees her father on a viewing platform on the western side and realizes he wants her to risk her life trying to tunnel to freedom.

These young adult novels tell the stories of girls in the middle of terrible conflicts, but who use every ounce of courage to make a difference in their lives and others.