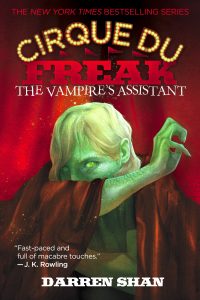 Two boys who are best friends visit an illegal freak show, where an encounter with a vampire and a deadly spider forces them to make life-changing choices.

If you want another dark, supernatural adventure, these young adult titles have plenty of it.

Seventeen-year-old Gene has passed as a vampire for years, carefully following every rule, but now, just as he finds a girl worth fighting for, he is chosen to participate in the hunt for the last remaining humans among ruthless vampires who soon suspect his true nature.

Allison Sekemoto survives in the Fringe, the outermost circle of a vampire city until she too becomes an immortal vampire. Forced to flee into the unknown, outside her city walls, she joins a ragged band of humans who are seeking a legend - a possible cure to the disease that killed off most of humankind and created the mindless creatures who threaten humans and vampires alike.

In 1888, twelve-year-old Will Henry chronicles his apprenticeship with Dr. Warthrop, a scientist who hunts and studies real-life monsters, as they discover and attempt to destroy a pod of Anthropophagi.

What would you do if you spotted a man following a young woman, but no one else could see him? Like most sane people, student Alex Webber thought he was hallucinating - perhaps he'd consumed something bad at the party he'd been attending that night, or he was severely overtired. But when he sees the mysterious man following Natalie again the very next day, he can no longer disbelieve his eyes.