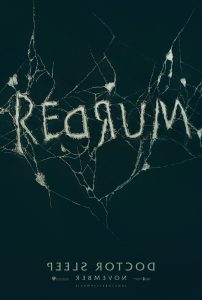 Doctor Sleep by Stephen King (Sequel to The Shining)
Years ago, the Overlook Hotel almost took little Danny Torrance's life as his paranormal gift known as "the shining" opened up a sinister supernatural portal that took his father, Jack Torrance's life. Danny - who now goes by Dan - has been drifting aimlessly most of his life, dealing with his father's curse of alcoholism. Eventually, Dan finds some order to his life by working in a local hospice. Here, he earns the nickname "Doctor Sleep" by using his special ability to calm the dying and prepare them for the afterlife. But when he meets 12-year-old Abra Stone, who contains a powerful manifestation of the shining, Dan finds himself scrambling to save her from the hands of a murderous tribe called the True Knot, who seeks out children with the shining to feed off of them. In order to do this, he must face the demons of his past, including the ruins of the infamous Overlook Hotel.

Doctor Sleep is an upcoming American horror film based on the 2013 novel of the same name by Stephen King, which is a sequel to King's 1977 novel The Shining. The film, set several decades after the events of The Shining, combines elements of the 1977 novel and its 1980 film adaptation of the same name directed by Stanley Kubrick. It stars Ewan McGregor as Dan Torrance. The film also stars Rebecca Ferguson and Kyliegh Curran in her feature film debut. It premieres November 8, 2019.

Are you looking for a similar book to Doctor Sleep? These terrifying stories relay tales of children and others, whose special gifts go deep into the realm of the supernatural.