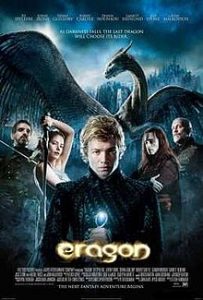 In Aagaesia, a fifteen-year-old boy of unknown lineage called Eragon finds a mysterious stone that weaves his life into an intricate tapestry of destiny, magic, and power, peopled with dragons, elves, and monsters.

Eragon is a 2006 British-American action-fantasy film directed by Stefen Fangmeier and written by Peter Buchman, based on the novel of the same name by Christopher Paolini. The film stars Ed Speleers in the title role as well as Jeremy Irons, Sienna Guillory, Robert Carlyle, Djimon Hounsou, Garrett Hedlund, Joss Stone and John Malkovich, with Rachel Weisz as the voice of Saphira the dragon. Eragon was released worldwide between December 13, 2006, and December 15, 2006, by 20th Century Fox. Originally, Eragon was supposed to be the first in a franchise based on Paolini's Inheritance Cycle book series with Fangmeirer shooting both Eldest and Brisingr back-to-back. However, due to negative reception from critics and book fans, the planned franchise was canceled.

If you're hunting for more dragon-themed teen books, check the suggestions out below.