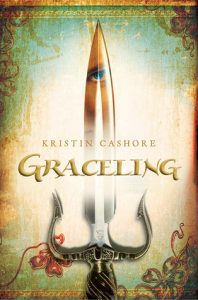 In a world where some people are born with extreme and often-feared skills called Graces, Katsa struggles for redemption from her own horrifying Grace, the Grace of killing, and teams up with another young fighter to save their land from a corrupt king.

There are two other books in the Graceling trilogy: Fire and Bitterblue.

If you want another book involving intense battles to the throne, check out these young adult titles.

Elloren Gardner is the granddaughter of the last prophesied Black Witch, who drove back the enemy forces and saved the Gardnerian people during the Realm War. But while she is the absolute spitting image of her famous grandmother, Elloren is utterly devoid of power in a society that prizes magical ability above all else. When she is granted the opportunity to pursue her lifelong dream of becoming an apothecary, Elloren joins her brothers at the prestigious Verpax University to embrace a destiny of her own, free from the shadow of her grandmother's legacy.

When assassins ambush her best friend, Rielle Dardenne risks everything to save him, exposing herself as one of a pair of prophesied queens: a queen of light, and a queen of blood. To prove she is the Sun Queen, Rielle must endure seven elemental magic trials. If she fails, she will be executed . . . unless the trials kill her first.

After losing everything when her father's kingdom is brutally and suddenly taken over, sixteen-year-old Princess Amrita flees the royal palace with her companion, the seer and former slave Thala, and together they hope to find the legendary Library of All Things, where they can access the stories of their lives and their loved ones, change their future, and save the kingdom.

When she is cast out of Wonderland by her evil aunt Redd, young Alyss Heart finds herself living in Victorian Oxford as Alice Liddell and struggles to keep memories of her kingdom intact until she can return and claim her rightful throne.

Sage Fowler, the apprentice to a matchmaker, becomes a spy for the army to uncover a treasonous plot and finds herself entangled in a romance with a soldier.