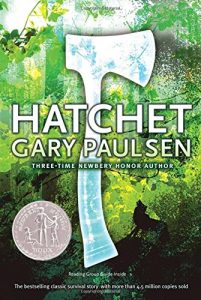 After a plane crash, thirteen-year-old Brian spends fifty-four days in the wilderness, learning to survive with only the aid of a hatchet given him by his mother, and learning also to survive his parents' divorce.

If you want an epic story of survival by brave and fierce teens, check out these suggestions.

"Cheryl Strayed's "Wild" meets "The Revenant" in this heart-pounding story of survival and revenge in the unforgiving wilderness.

Adrienne Cahill cares about three things: getting into a great college; becoming a revered journalist like her idol, Sydney Declay; and making her late father proud of her. So when Adrienne is offered the chance to write an article that will get her into her dream school and debunk her foolish stepfather's belief that a legendary family of hermits is living in the Siberian wilderness, there's no question that she's going to fly across the world. But the Russian terrain is even less forgiving than Adrienne. And when disaster strikes, none of their extensive preparations seem to matter.

When a mudslide wipes out multiple members of a wilderness therapy trip, the three surviving teenagers must survive the elements, their demons, and one another.

Less than forty-eight hours after 12-year-old Chris sets off on a sailing trip down the Alaskan coast with his uncle, their boat sinks. The only survivors are Chris and a boy named Frank, who hates Chris immediately. Chris and Frank have no radio, no flares, no food. Suddenly, they've got to forage, fish, and scavenge the shore for supplies. As the days get colder and the salmon migration ends, survival will take more than sheer force of will.

Sixteen-year-old Miles, thirteen-year-old Sarah, and their parents find themselves changing in many ways as they struggle to survive winter in a remote cabin while keeping anyone in the nearby town from learning they are living there illegally after the devastation of volcanic eruptions drove them from their Minneapolis home.